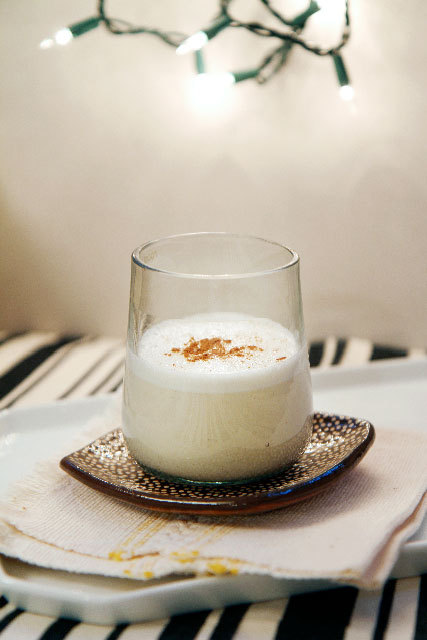 Like Bit-O-Honey around Halloween and Peeps on Easter, egg nog is the polarizing treat of the winter holiday season. People that like it like it, but people that hate it…well, hate it.

And for the first twenty-seven years of my life, I was one of ’em. A most hating of haters. Even the smell of egg nog was enough to shrink my Christmas spirits to three sizes too small.

But then I realized:    I’d never actually had real egg nog. My experience came in a carton, or a jug, or even a milkshake. I’m mean, I’m sure there were actual eggs in the storebought stuff, but also stablizers, a homogenous texture, too much sugar, and no flavor.

So friends, the stuff from the grocery store and the stuff actually made from whipped egg whites and real ingredients are worlds and worlds apart.

So, I’m venturing that the nog haters out there are actually those who’ve never had the fresh made stuff from an actually tasty recipe. Cause when you have, you’ll start to be sad that you only get to drink it once or twice a year.

So, to begin the nogversation, check out Mental Floss’ Way More Than You Ever Wanted to Know About Eggnog, a fascinating look at its origins.

The word “eggnog” itself has fairly murky origins, but many etymologists think the name stems from the word “noggin,” which referred to small wooden mugs that were often used to serve this type of drink. Others propose a similar story but explain that the “nog” comes the Norfolk slang nog to refer to the strong ales that were often served in these cups. Still others think the name is a contraction of colonial Americans’ request to bartenders for an “egg-and-grog” when they wanted a glass.

Then, get to whipping. I’m partial to this recipe by Alton Brown, bourbon included. It’s the one that got me to change my mind, and it’s not so heavy and over the top that you feel you can have a second glass. 🙂 Go for the uncooked version and use pasteurized eggs, and you’re go. 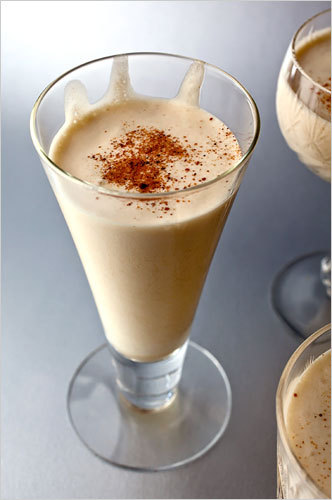 For those already convinced, it’s time to spice it up a bit. The New York Times subbed in some brown sugar and added vanilla to a butterscotch nog with smoky scotch and brandy.

Coquito, the “Puerto Rican answer to eggnog,” builds its base from sweetened condensed  evaporated milk, then adds coconut milk and spikes the mix with rum. (Pictured at top).

What say you? Are you a nog neglector or a foamy fan? Also, how to you feel about weird aliteration?