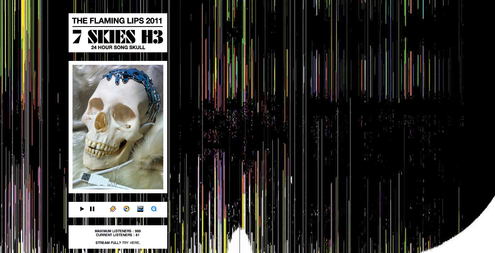 When you’ve created a quadruple album in which all four records are meant to be played on four stereos simultaenously, created an original musical film entitled Christmas on Mars, and become one of most inventive and interactive touring bands (while creating a crazy, sci-fi’d Art Deco home), what’s left?

Well, you compose a musical adventure that lasts twenty-four hours, and stream it for free on the internet. Oklahoma City-based psychedelic rock group The Flaming Lips have created 7 Skies H3, a “24 hour skull song” perfect to accompany your post-Halloween candy sugar comas. It sounds like, well, what you might imagine a 24-hour Flaming Lips song to sound like. I haven’t been able to find much information about how it was composed or recorded…like, whether it’s basically a stream of jam sessions placed back-to-back, or how the band remembered what was supposed to happen at which time. Hopefully, they’ll be more info soon.

For now, stream the whole thing for free at flaminglipstwentyfourhoursong.com