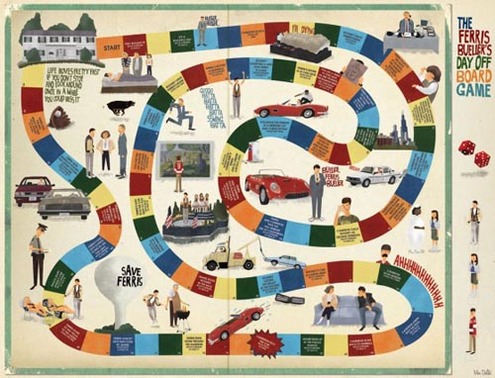 I never skipped school. Not one time. Lame, I know.

I was either legitimately sick, or had a darn good excuse. Heck, I only missed, like, three classes in college, and they were all because I was out of town.

But I wanted to. I was too afraid, but, boy, did I wish I could give myself permisson to pull it off. Put the thermometer under the lamp. Sneak a hot water bottle under the covers. Perfect the raspy voice and fake cough. Like my man, Ferris Bueller.If I’d actually known someone like Ferris in high school, I probably woulda hated him. But on screen? That’s my dude.

So, of course, I’m appreciating this Ferris Bueller’s Day Off boardgame by retro-y artist Max Dalton. He says, “An amazing tribute show to John Hughes’ films will take place at the brand new Venice place of Gallery1988. My contribution to that show will be this Ferris Bueller’s Day Off Board Game print. Original piece comes with dice, counters and rules of play. A little run of smaller copies will also be available at the gallery during the show.” 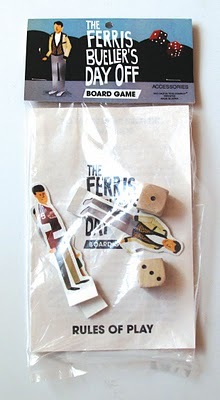 And, I’m sure you’ve probably seen this, but just in case: