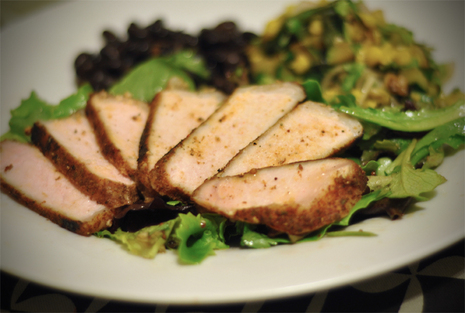 So, my girl got me the best Christmas gift of all time this year: a PID temperature controller, vacuum sealer, and a copy of Thomas Keller’s Under Pressure. Which meeeaans…. I can now cook sous vide!

Sous vide [French for “under vacuum”] involves cooking food in airtight bags in temperature controlled water for long periods of time…essentially slow-poaching everything at an exact temperature. Since the food never rises over the desired doneness, it can never get overcooked! Neat, huh?

Of course, I played around in the week between Christmas and New Year’s, but since it involves so much gear, I put it away with the decorations. But in the last few weeks, with all the crazy snow and ice, I’ve been staying inside, and really learning how to do it well.

Last night was my best effort yet: adobo rubbed pork loin, with a zucchini and roasted poblano succotash, and Oaxacan black beans.

I started with a whole pork loin I bought on super sale. The middle section was so small, that cutting it as standard chops wouldn’t have produced much. Enter sous vide, which allows you to cut proteins as thick as you want without any worries of it getting overcooked. I sliced it into 2″ sections, and sprinkled with a heavy dose of seasoning. (Since a lot of it ends up in the bag).

Since I wasn’t grilling, I also added a teaspoon or so of brown sugar, which normally burns on high heat surfaces. 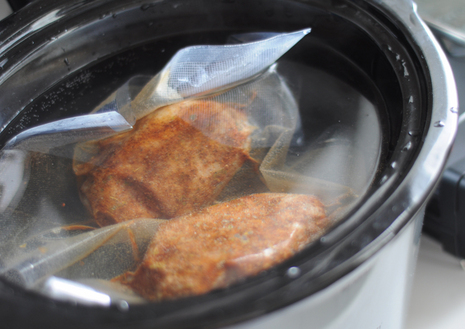 I vacuum sealed them with a few sprigs of fresh time, and placed them in my water bath. I don’t have a fancy immersion circulator, so I just use a $25 slow cooker. I hope to upgrade to a large, commercial rice cooker soon, which fluctuates the heat much faster, allowing it to come to temp much sooner. Plus, they make them in 45-cup sizes so I can cook for more than a few people. 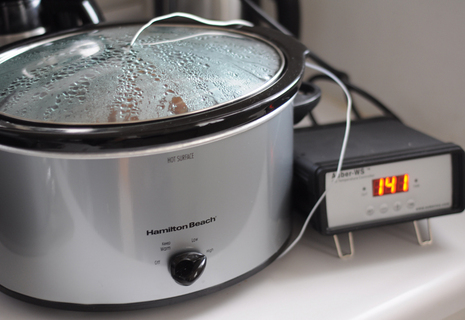 Pork needs to cook at 141° F for at least forty five minutes…but I had all day, so I did mine for six hours to get some serious tenderness. 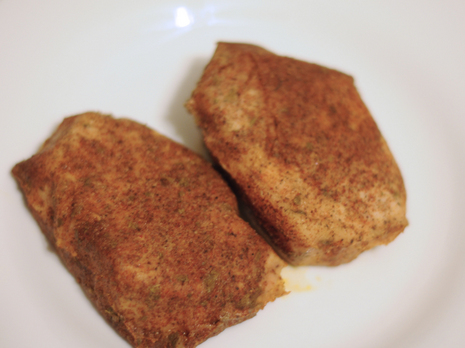 One of the downfalls with cooking sous vide is that there’s no carmelization from the high heat, which tastes great. Although things come out perfectly done, there’s no intense browning that we associate with properly cooked foods, and brings out new flavor compounds. (That’s called the Maillard reaction…Google it) 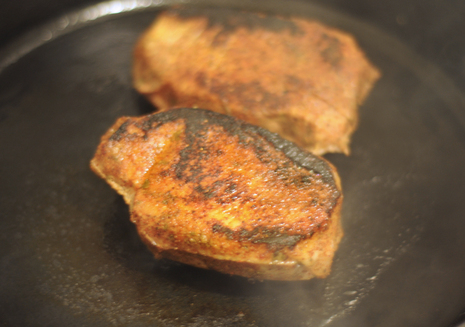 So, after coming out of the water, I gave them a 90 second sear on an extremely hot cast iron skillet. Since they were so thick, I probably would have left them on just a bit longer, but the brown sugar was at a perfect near-black, so a minute and a half it was.

The best thing about sous vide protein is it doesn’t need to rest so that the liquid can redistribute. Just slice, and serve.

Don’t hate on the six hour cooking time. Since it’s in a slow cooker, you can just set it at lunch and totally ignore it until its time to eat. It actually takes less active time that grilling or pan roasting.

Also, please forgive the photos. This was my actual dinner, which means the pics were taken after dark in artificial light.