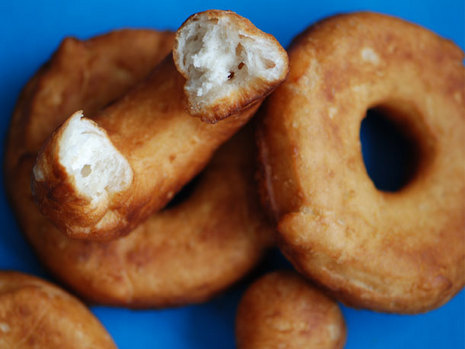 I never had a real doughnut until I was eight or so.

Well, I guess by real, I mean “fresh, and from a bakery.” See, my earliest doughnut memories involve 1) either those awful powdered sugary things that come in the re-sealable bag, or 2) those things my parents would cook in the crock pot..which actually had to be some sort of deeper fryer, but it lived in the lazy susan, and I wasn’t allowed to touch it, so it was all the same to me.    Of course, we weren’t home gourmet enthusiasts whipping up fresh yeasty doughs and homemade glazes. Nope, we fried canned refrigerator biscuits and tossed them in cinnamon and sugar.

So, I felt a twinge of nostalgia when I saw this write up on easy homemade, or “campfire” doughnuts, that require only a tin of pre-made biscuit dough and some hot oil, not yeast-rising necessary.

“Soft, escalating, and deeply thoughtful, Homer Simpson’s trademark moan of“Mmm…donuts..” is one of the most gut-wrenching sounds I’ve ever heard. And I mean gut-wrenching in the most literal way: my stomach awakens and all I can think of is a golden halo of fried dough cloaked in sweet gossamer.

My doughnut deliriums can be triggered by Homer, the sight of Krispy Kremes being delivered via conveyor belt past a cascade of glaze, or a humble sack of supermarket brand powdered doughnuts. Don’t get me wrong; there are subpar specimens that even I won’t eat—dry, leaden, negligently glazed—but for the most part, give me a doughnut, and I’m a happy camper.”