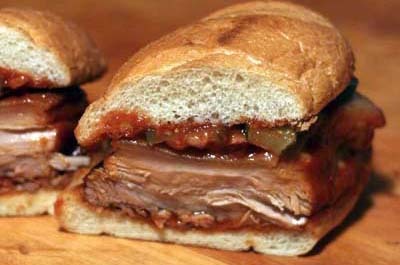 I, myself, have never had a McRib sandwich, McDonald’s limited run sandwich first introduced in 1981 but I certainly know it’s cult-like following that has inspired sites like the McRib locator, and moves folks who would never otherwise go inside a McDonald’s to make interstate pilgrimages.

It’s currently in restaurants nationwide for the first time in sixteen years, but there soon come a time where it won’t. And then what?

Why you make your own, of course. 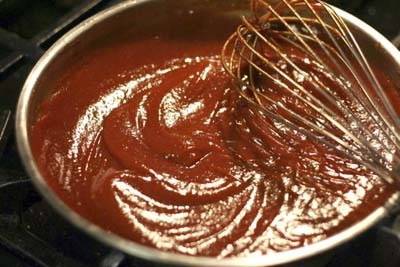 Starting with that fatty cut of pork, I decided to reinterpret the McRib using pork belly, which, over the course of a three-hour braise, turns from a three-pound cut into something like the preformed pork patty’s blindingly spectacular cousin. While it cooked, I made a quick pickle and a simple barbecue sauce from scratch, and sliced some red onions — sweeter than the white — to add even more crunch. I stuck with store-bought rolls, but you could easily up the homemade factor and make your own basic white sandwich roll or go really indulgent with a brioche. Sure, it might take a little more time than simply popping down to your local McDonald’s for a McRib, but you’ll never have to worry about whether it’s been taken off the menu.

Dude even made his own pickles.

Make Your Own McRib: Bigger, Better, and Always Available