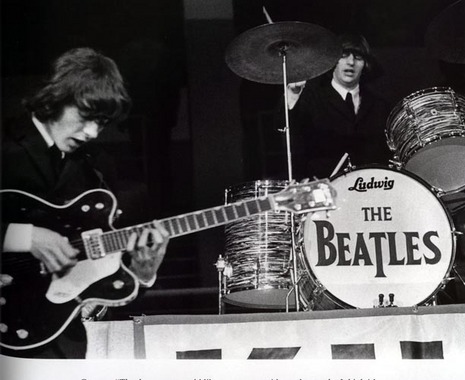 Today, Apple announced that the Beatles catalog is now available on iTunes. Most people reacted by saying, “the Beatles weren’t on iTunes?” and the rest said, “If you’re a Beatles fan, then you already have most of their catalog in your iTunes library.”

But, here’s a bit of Beatles news worth mentioning: the new book Just My Type: A Book About Fonts contains a chapter “The Serif of Liverpool,” discussing the origins of the Beatles famous logo, forever emblazoned on Ringo’s kick drumhead.

It wasn’t a typeface … I think I drew it when I was at school,” Paul McCartney explains. “I used to sit around endlessly with notebooks, drawing Elvis, drawing guitars, drawing logos, drawing my signature…” Yet McCartney admits he isn’t altogether sure of the logo’s origins, and Ivor Arbiter, the owner of a London drum shop, claims he designed it for £5. “Whoever was responsible,” says Garfield, “it seems likely that the main subconscious influence on the look of the letters came from Goudy Old Style – which would place the nameplate of the most famous English pop group of all time firmly in the heritage of early 20th-century America.

I Wanna Hold Your Type [Imprint]