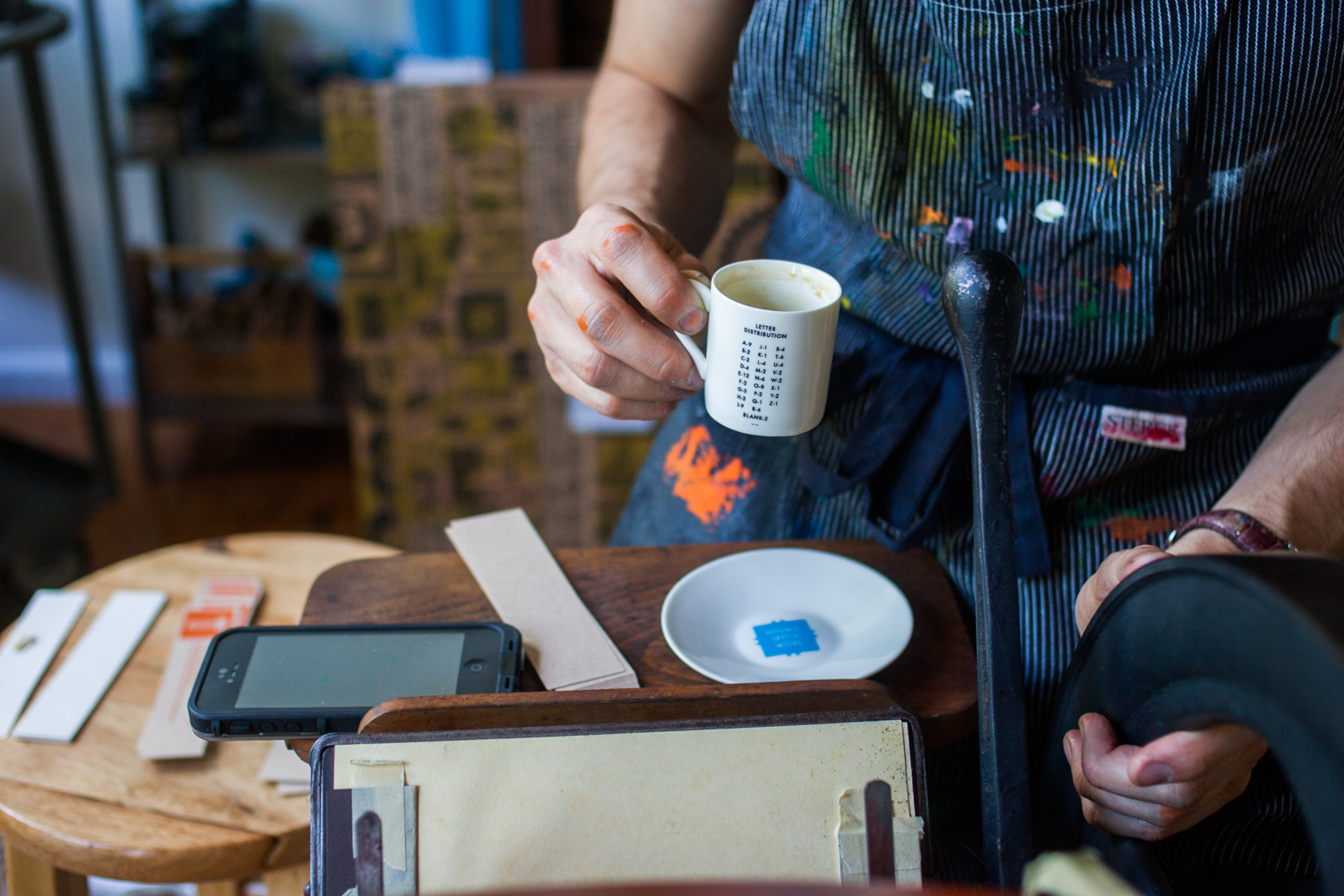 Congratulations, you found a craft that calls to you!

You dove down into the rabbit hole to see how deep it goes, and in your pursuit of excellence, you've gone pro—harnessing those hours spent doing something else to make a living, transferring them into your trade. The only problem: quitting your day job suddenly means the weight of your income rests squarely on your craft's shoulders, and it's rare to make a decent wage as a beginner.

The good news is that no time spent in your craft is wasted, so even while you're hustling and just barely making it, you can build some really valuable resources that will provide immense payoffs later.

Read on for a modest proposal of what to do when the wider world doesn't yet recognize the value of your work!

Basically, you're going to be expanding the definition of capital beyond just money.

Yes, cash is a crucial resource. As a self-employed artist and craftsman for almost 10 years, I've lived and worked through both feast and famine, and I've learned that money equals material freedom: when you're broke, you have to do whatever it takes to make a living, and when you're padded, you can better choose how you spend your time.

But money is fickle; it seems to come and go as it pleases. Besides, as a creative person, work done solely for the money is rarely (if ever) fulfilling in the same way as work done for its own sake.

Here are three types of more reliable capital you can build regardless of how much money you have, all of which keep well and apply across all disciplines. (In fact, I've arranged this list according to stable shelf life, from shortest to longest.)

Note: for the purposes of this post, we're taking a wide definition of the word craft. Yes, we're talking handicrafts using traditional materials (wood, metal, clay, fibers, paper, ink) and decorative crafts, like drawing, design and calligraphy—but more generally, a craft is a skill applied to making something. So we're also talking coding, music, writing, acting, you name it.

I. Build Your Network

If you've got this idea of yourself as the rugged individualist, launching out into the great unknown to tame the wilderness: forget it, man. Life isn't a spaghetti western, and you're not Clint Eastwood.

This isn't to say that the lone wolf can't accomplish anything, and this isn't a diatribe against self-sufficiency; it's just that we in the West tend to overemphasize the ideal of the captain of the ship over the rest of his crew. (For example, have you ever heard of Roy Disney? If it weren't for his behind-the-scenes financial genius, his younger brother Walt probably wouldn't have professionally amounted to much beyond a failed animator.)

So while you're trying to build up your bank account, create business relationships. Get on social media, comment and like to the max. If you're able, grip and grin at trade shows, markets, and get-togethers. Send emails sincerely complimenting your professional peers on a job well done, without expecting an email in return. It doesn't matter how “far up” a person gets—everyone but a sociopath loves to be cared about. You never know who will be the one to give you your big break, and you don't know if it's going to be in 5 months or 5 years.

Two thoughts on this matter:

1. Channel JFK's inaugural speech and approach people with an attitude of service: think about what you can do for them, not what they can do for you. (Even if you're still acutely aware of how valuable that professional relationship is.) Also, don't just vaguely volunteer; that just forces an already-busy person to do more work by figuring out where you fit. Offer something specific and valuable, even if it's for free, and please don't imply what you'd like to receive in return.

2. Relationships are like fires: they require fuel and tending. The stronger the fire, the more it needs. The so-called “weak tie”—also known as the acquaintance—can stay as embers for quite a long time; just make sure you check in every once in a while to see how that person is doing. 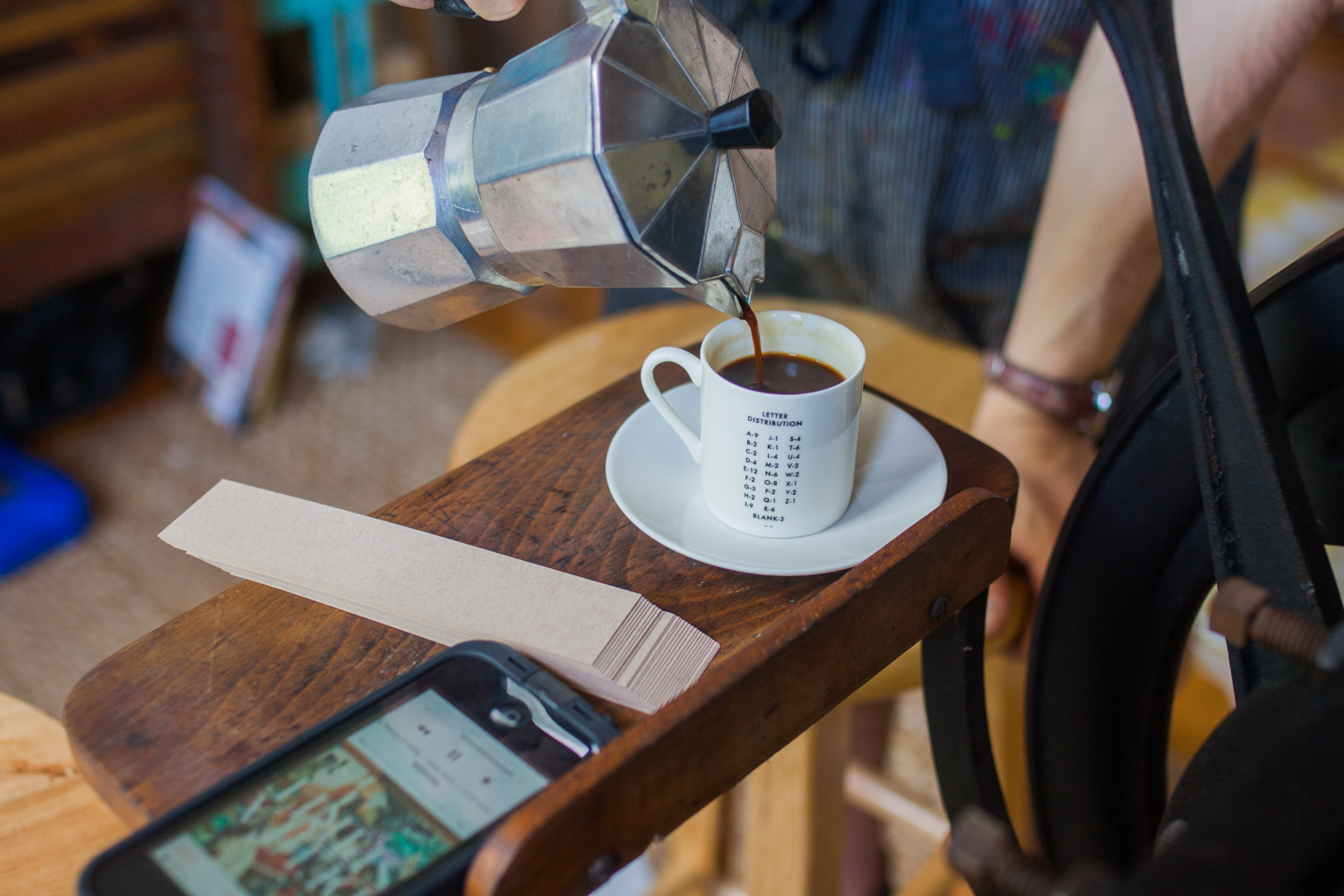 This is totally obvious on paper, but it's totally easy to stop caring about when you're raiding the spare change in your car to buy instant ramen.

Since you're going to be spending more waking hours mastering your craft, you'll start to see the areas where you're weak. Target those areas and systematically drill down on them while growing your strengths. (For example: as an illustrator, I've got a good grasp of composition and underlying shapes, but I still feel like a total noob when it comes to color theory.)

In addition to the skills in your main craft, you can also pad your toolbox with a wide range of auxiliary skills. For example, there are quite a few that are becoming increasingly more important in the social media era, like photography, video and editing, and basic coding.

And then there's always the ever-overlooked skill of writing! (I can't overemphasize how much it bugs me when people write professional emails but don't even take the time to follow basic grammar rules like capitalization. It's like come on, dude, how do you expect me to take you seriously when you don't offer yourself the same courtesy?)

On this point, it's worth mentioning that sometimes you're not making enough to quit your full-time day job, or you at least have to take part-time work to make ends meet. This time isn't a waste if you spend it intentionally. Here are some examples from my own circuitous career:

• I shot weddings on weekends from 2010–2013 with my wife and really learned what makes a good photo, which is a skill that I use about 3 times a week for ManMade.

• Starting in 2004, I've worked at 4 coffee shops, a coffee roaster, a juice bar, a deli kitchen, and the pastry kitchen at an artisan bakery; not only do I cook confidently and economically at home, but the experience has also provided a lot of good material for ManMade posts.

• My last (and best) part-time job was in 2014 as a crew member at the Trader Joe's in Chapel Hill. It was the most fun place I've ever worked, and it taught me a lot about how to maintain a positive workforce in an industry that can quickly become tedious and miserable. If I ever hire help at my mom-and-pop operation This Paper Ship, I'm taking cues from Trader Joe's on how to care for my employees by making them feel valued through consistent, systematic empowerment.

Action x Time = Experience. When you spend an extended period of time consistently trying to do things, you learn by picking up patterns of cause and effect. This is the magic of practical wisdom.

The beauty of learning through experience is that failure is a better teacher than success. You actually gain more when you lose because it's not always apparent what makes something successful, whereas the proverbial 20/20 hindsight vision usually makes failure post-mortem reports a rich education. Keep your chin up and you'll build that coveted characteristic of strength in the face of challenge known as grit; adopt the attitude that seeks the fruits of taking risks and failing, and you'll gain the trait of antifragility that actually thrives on adversity.

So how do you build your experience? Friend, you're in luck!

The Three-Step Program for Gaining Experience

3. Then work a little more.

Seriously, though: the only way to get work… is to work. When you're just starting off, take any commissions or clients you can. If you can't get any commissions or clients, be your own client and start producing the kind of work you want to get hired to do, slap it up on a website and Instagram account, then do it over and over again. No time to do all that extra work? Get up early and hustle. Cut your Netflix time down to one episode a night instead of your normal binge. 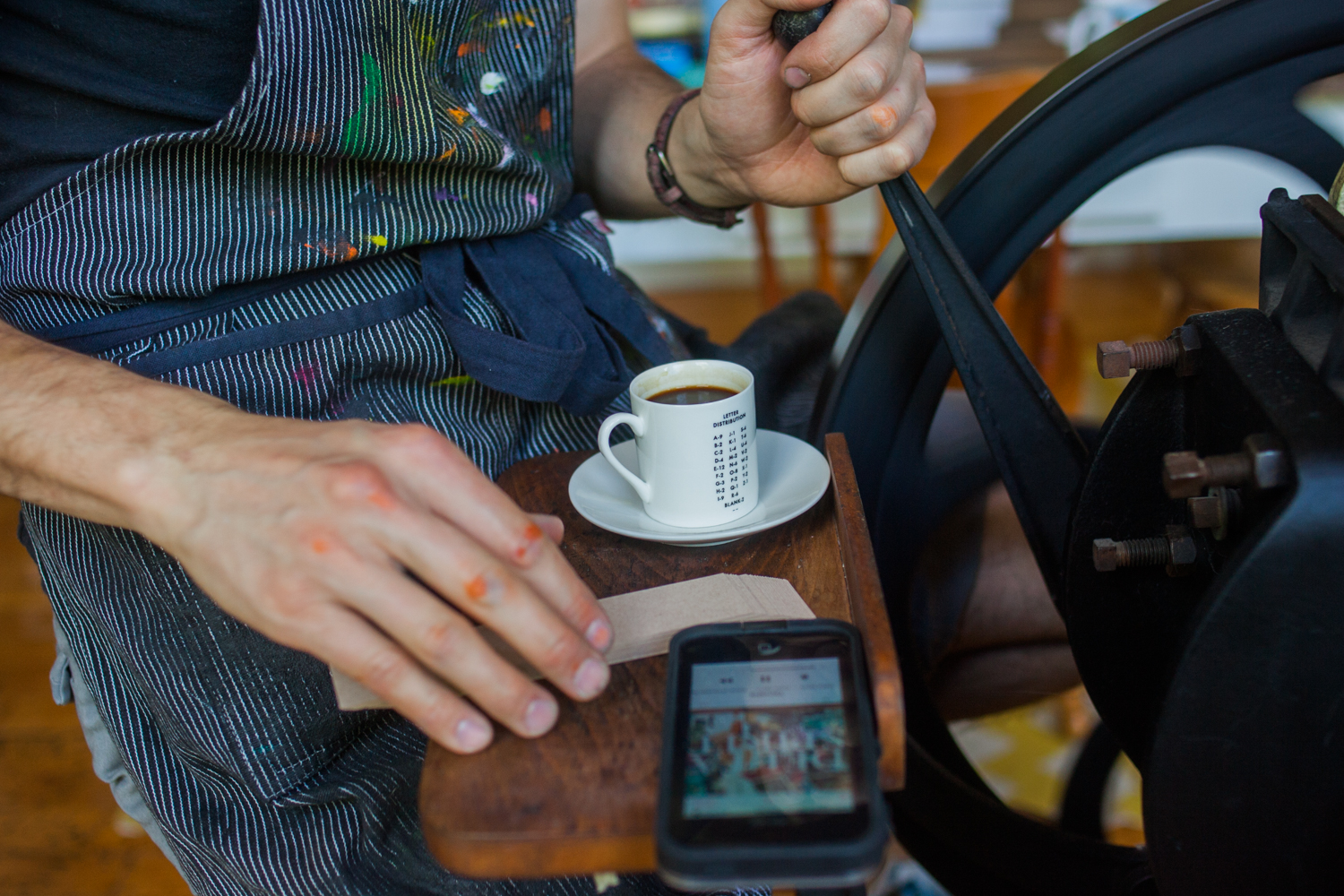 Say yes to everything until you can afford to start saying no!

And be flexible when you're just starting out to professionally ply your craft—sometimes you'll need to take creative work that's not exactly what you want to be doing long-term, but it's at least in the same neighborhood (or sometimes, in the same county).

My favorite illustration of this is from Neil Gaiman's now-legendary “Make Good Art” commencement speech in 2012, where he compares creative goals to a mountain. As a creator, if you're really far away from your mountain, taking a general step forward is still getting your closer; as you get closer, your direction becomes less general and more specific. Mr. Gaiman's first published book wasn't a piece of fantastical fiction, it was a biography of Duran Duran; though the publisher went out of business shortly after it was published, and he later said it was the worst book he'd ever written, it still gave him publishing credit and paid him enough to afford a typewriter and a few months' rent. It got him closer to the mountain than he was before.

…isn't that all ridiculously hard? I'm sorry to bearer of bad tidings: sometimes it is!

Like Harry's wand, the craft chooses the crafter. (Yeah, I'm a Potter fan.) In every interview with a master I've ever seen, when describing their origins, they consistently speak of having been swept into their craft like they were being pulled out to sea—they could have resisted, sure, but the pull was so strong that they yielded to it out of awe.

The thing you always have to remind yourself of is that this is what you would be doing even if a lifetime of it never made you so much as a dime. And anyway, as long as you're moving forward, you'll always gain new ground.

So yes, keep pouring your heart and soul into this thing while it's getting on its financial feet! 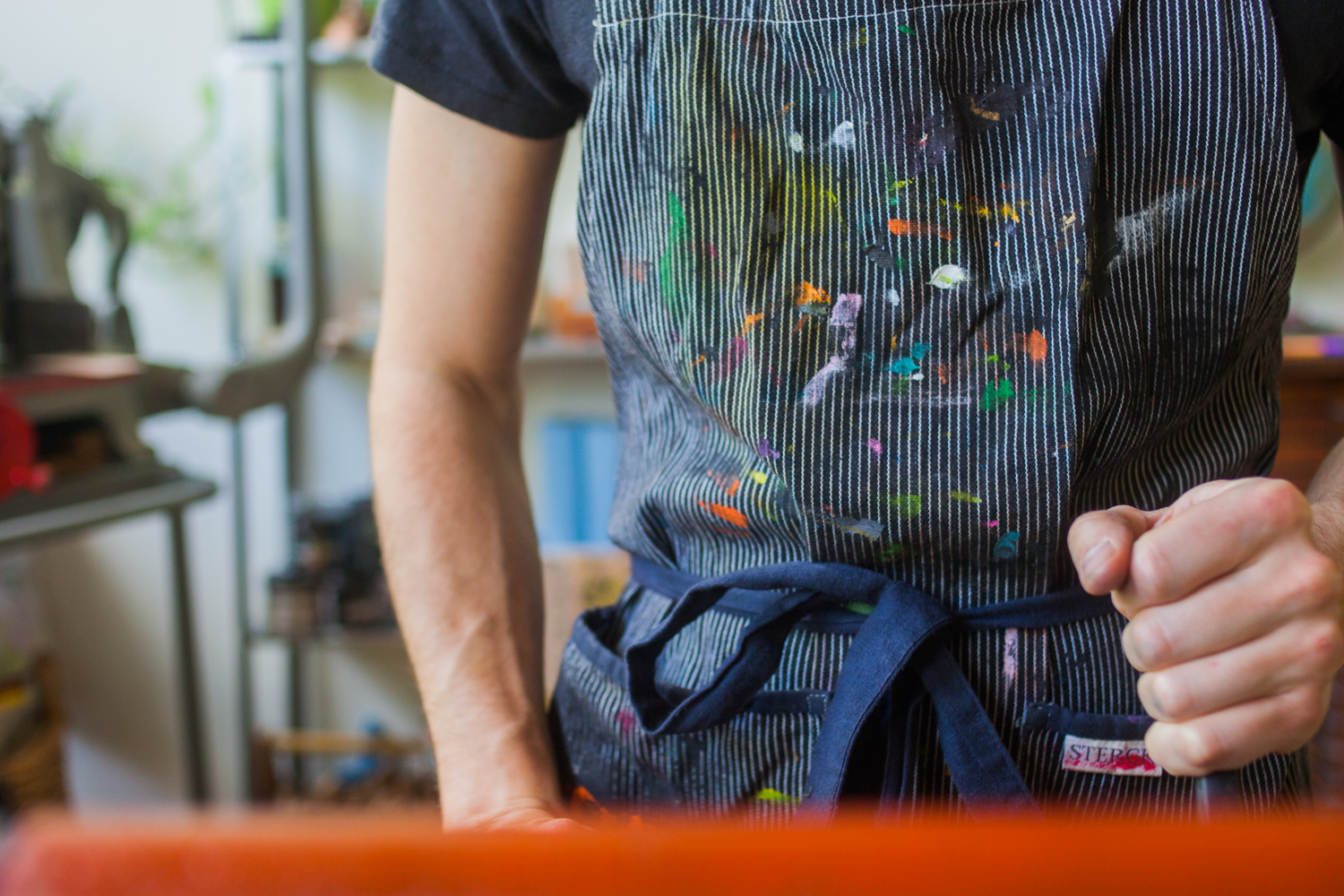