There is a new phenomenon where lonely people have finally found a voice to express their loneliness. And wouldn't you know it – they found it on the internet. Of course, the internet is not the reason we are lonely and it is not the source of loneliness, but it certainly is the vehicle that allows people to talk about how lonely they are. But it is the internet that has turned it into something universal, something memetic. (Though I spare you examples here, the internet abounds with them. You've seen them.)

But the other thing is that loneliness is not necessary, because people are basically everywhere. But any adult will tell you that it is somehow very difficult to meet people once you have grown up. As a child, in school and in college, you have cadres of people just waiting to become friends. But when you step out of the security of institutions built around your social development, suddenly it feels like there is no way in. Some people join rec sports teams, some people hang out at bars or go to work happy hours. And of course most of us try to keep in touch with friends from our childhood and college. But there is, actually, a ready-made venue for making friends and, what is more, turning your social existence into something enriching at more than one level: voluntary associations.

Voluntary associations are those groups of individuals who gather together in some organized form for basically any purpose. The organization and its attendant imposition of obligations is an important part of this. A rec league volleyball team is a kind of voluntary association. A group of people who happen to drink at a bar together is not. I think the difference is clear. You are responsible to the people on your team. You have obligations and a sense of cooperative relations with people you play with. You may even have a leadership structure (or at least a way of divvying up responsibilities). Bar mates are simply that.

I note all of these dimensions because, especially as I have grown older, I realize how important these dimensions are in my social relationships. Most of us enter the world through a structured social setting like a school, and even though we don't realize it those settings help manifest the relationships that we build. Whether that was because you helped sell wrapping paper for the JV hockey team or if you were the goth or punk smokers that routinely cut biology class, the strictures of your setting helped foster your relationships. It turns out that, as an adult, this is no different. It's just that as an adult, you have to choose and prioritize the who and the what and the why.

Rec sports is one option. But another option is a volunteer group, like Habitat for Humanity, the Boys and Girls Clubs of America, or a local soup kitchen. Another option is a religious meeting place like a church, meeting house, synagogue, mosque, Buddhist meditation center or otherwise. Still another is going full-on 50's dad and joining one of the many formalized voluntary associations that dot the countryside even now––the Rotary club, the Lions club, or Kiwanis. The thing that matters about all of these venues is that it will put you in touch with people in a setting that is bigger than the individuals that make it up.

Among these people you'll have to do things that are difficult, like vote in leadership, dialogue with people who disagree with you, compromise over issues that are controversial. But you'll also do things like meet people who are at least endeavoring to be the best versions of themselves and create through social interaction a program or series of projects that would not exist in the world without you. And there are untold other benefits that are unexpected until you get your hands in the dirt. Feel like all of the people your age are on a different wavelength that yourself? Try meeting a WWII vet in his 80's and spend a weekly afternoon in his company. Feel like you had an especially difficult upbringing? Try working with youth from a different race, class or ethnic background than yourself, and let your experience help them navigate a strange world even as their experience broadens yours. 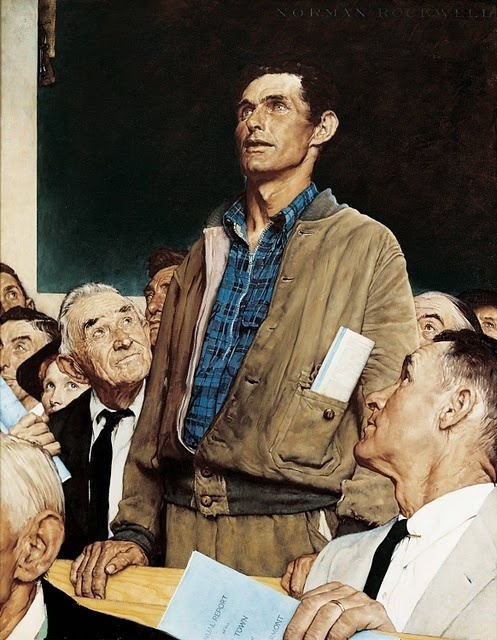 There's only one problem with voluntary associations. You have to actually join them. There's no workaround for meaningful social interaction. There's no hack. There's no way to do this while in your PJs. And its not always easy. Sometimes that old guy is a racist windbag who won't shut up, and sometimes that young person is a narcissistic jerk who doesn't want your help. Sometimes it means going to meetings after work when you're tired. Sometimes it means talking through issues that don't seem worth the time. But that is what it costs to know people and to be in relationship with them. The thing that is certain is that you will get much more out of knowing people through voluntary associations than you put into them. They are a cure for loneliness, they are a model for what democracy in practice entails, and they are a mechanism for making our entire social system more conscientious of the people that make it up. It is a way of being that matters to the world.

Allan
Allan Georgia lives in Cleveland, OH, where he consumes more coffee, whiskey and noodles than he should. But he's working on it. He loves thinking about big ideas and seeing the virtues in??very ordinary things. He writes on C/culture and religion when he is not trying to make things without burning??himself or smashing his fingers o[...]
Next Post
civics culture lifestyle manliness politics self-improvement service talk technology volunteer