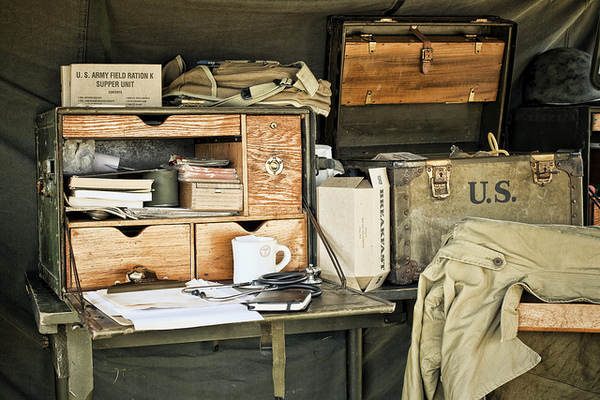 I've had a generally mobile office for years. What this looks like to me is a laptop, random notebooks, and a mass of cables. While I've set up my “office for the day” in a variety of spectacular locations,  I've always lusted after the campaign desks of old, which adventurers carried along to pen notes, history changing letters, and likely stash a bit of liquid courage.     In today's world I will likely never justify carrying around a large wooden office in a box, but I can't help but love these designs that conjure up dreams of sailing, safari, and military campaign. 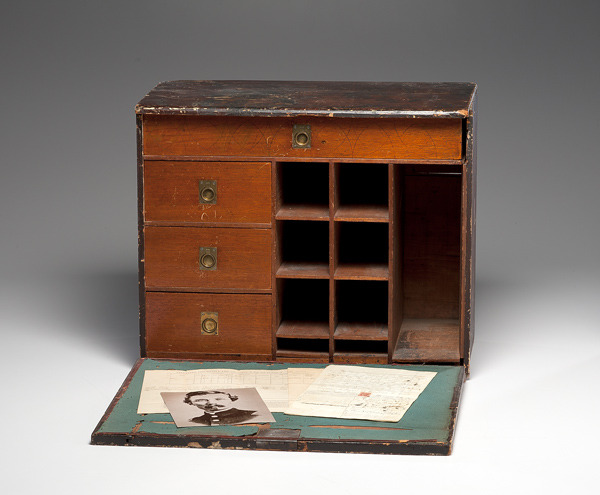 1. NY Civil War Field Desk –  This civil war desk has a few simple drawers, a nice writing surface, and cubbies for letters, or other small pieces. The ring handles are clean and fit flush for a tight folding fit when closed up. The worn green felt writing surface of this table is great, with a few clean touches, like the locking flush-mount latch to keep it secured out there when it's time to break camp and head back into the field. This desk was owned by Charles W. Kennedy during the civil war is can be purchased today for about $5500. 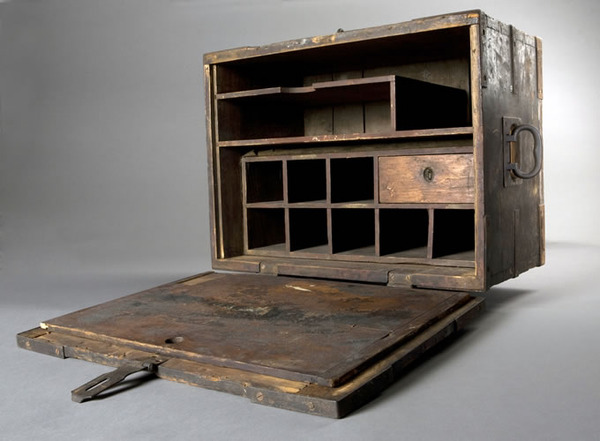 2. Captain John G. Kayser Field Desk – This field desk is far more primitive than the example above, mostly because of the man who bought it. This box was used by a field staff member to organize the mountain of paperwork that comes with any battle. Reinforced with metal edges, and sporting solid side handles meant this case was expected to see some abuse. While I like the robust design of the outside, I'm inclined to prefer a few more drawers to keep the contents organized in transit. The hinges also don't allow for it to be laid on a flat surface very efficiently, so crafting a flush hinge was a well thought-out upgrade for the gentleman's version. This desk is safely in the Missouri civil war museum and not for sale (for now). 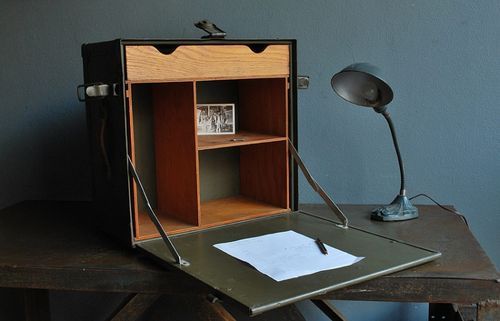 3. World War II Field Desk – A much more recent desk compared to the others, this one was upgraded with more metal, lighter materials, and the simplicity that indicates many things. First, there was much less of a need for so many paper cubbies thanks to radio communication and typists, second, the fact that all equipment and supplies traveled by vehicle instead of mule-train meant a full campaign didn't have to be stuffed into the little space. This small desk was likely used by an officer to organize personal information, correspondence, and also to make a space feel a bit more familiar in a foreign land. The simple wood frame and drawers contrast nicely with the metal box design. Although it's no longer found at the auction house, it was listed for about $1500 at the time.

While I'm not sure if a DIY version of this type is in my shop's future, I think a solid camp kitchen project may be gleaned from this type of design. Solid necessity and a need for exceptional organization seem like the perfect match for a campaign-style field box.

Do you work out in the field? We'd love to see a picture of your “office for the day”!