“Anyone can go to Design Within Reach and buy some stuff and say: ‘Look! It looks like “Mad Men.” But if you actually watch the show, you’ll realize you’ve never actually seen anything sold at DWR. The set dressers purposely avoid iconic mid-century pieces by outfits such as Herman Miller and Knoll, opting for timely pieces, not design classics. [I did spot a few Saarinen womb and office chairs when Don went to Calfornia, but they filmed it in the famous Case Study House #22, so in every way appropriate.] 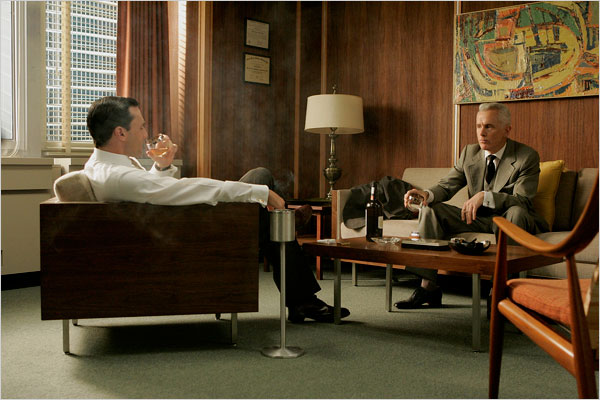 “In keeping with the producers’ gag order on details about the upcoming season — even the exact year in which it’s set — he declined to talk about how the residential scenes, including Don and Betty Draper’s home (or homes, should she go through with the divorce threatened in Season 3), might evolve this season. But he did share a few hints about how interior design changed going into the mid-’60s. “Part of it is a color thing,” he said. The show is moving more toward primary colors, and away from the muted tones of the ’50s. During that time, people moved more toward more curvilinear, shapes — wilder shapes and colors. In one sense, I’d say it’s less sophisticated, the ’60s,” he said. “We are moving toward that to a degree.”