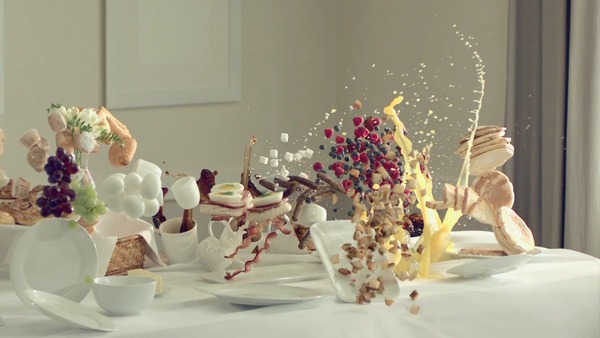 Nothing like enjoying a delicious meal just before it all goes crazy. On purpose.

This super fun video, entitled “Breakfast Interrupted” by Bruton Stroube Studio is somewhat of an epic food fight video, sans the people throwing it. It’s almost as if there was a mystical force pulling the table from above – and by “mystical,” I mean a hydraulic pump going crazy.

Shot at 1000fps, each second of this short film captures in detail the way food behaves when it’s not handled with care. For the average human eye it all looks like mess, but when you see it through the magic of the lens of Bruton studio, it becomes a hypnotic dance of sorts.

So jealous of these guys! It looks like they had a blast shooting the whole thing, if you don’t believe me, watch this behind the scenes clip:

The video was actually created two years ago, so you may have seen it make the rounds already, but it’s new to me, and I just couldn’t help but share.