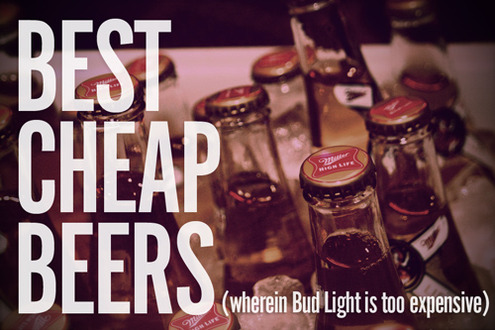 There are lots of kinds of beer drinkers…those who wouldn’t be caught dead with an American Pilsner from a major brewery, those who wouldn’t consider anything else, and the entire spectrum in between. But in the race to taste every micro, spring-water brewed ale with as many IBUs as possible, the question still deserves discussing: which cheap beer is actually worth drinking. And by cheap, we mean cheap…like, wherein Bud Light – the United State’s best selling beer – is too expensive.    Troy Patterson decided to try ’em all, and wrote his findings for Slate. He says,

To survey the world of cheap beer is to examine a complicated terrain of class markers, class solidarity, and classiness indices…What, exactly, are you getting when you pay less? Sometimes, it is the local pride of a traditional favorite… Sometimes, it is a can of relatively palatable foreign swill marked down for complex cultural reasons… And sometimes you are getting an economy-priced headache. Let’s knock back a mixed six-pack of notable brands.

The Best Worst Brews: A taste test of cheap beers