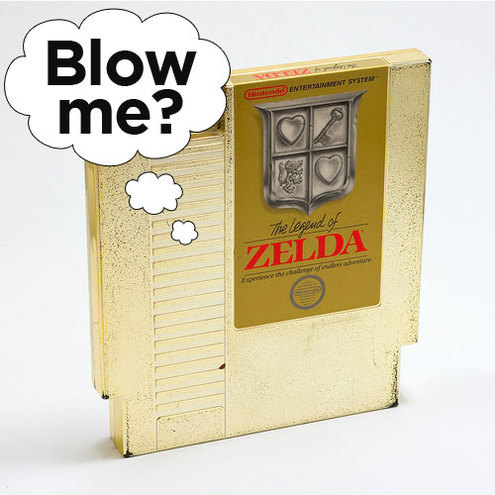 Whether by urban legend or repeatable data, anyone that grew up with a Nintendo Entertainment System was aware of the, “when the game won’t load, you show blow into the catridge, and even the system,” particularly on pesky games like the metallic cased “The Legend of Zelda.” I’m even willing to bet that that characteristic soundbite of forced air rushing around a 4×1″ plastic hollow would be instantly recognized by anyone born from 1975-90.

But…did it actually work?   Turns out: no. Not even a little bit.
No matter how much any of us would attest, it’s technologically impossible…and in fact, may have even hindered the success of the game loading after time.

While I admittedly may have dabbled in a little cartridge-blowing as a naive NES-playing youth, I’ve long-since been an advocate for not doing it with the stance that for whatever it may do to aid in the temporary functionality of an NES, it ultimately opens the door for damage and distress to the hardware….While there are some collectors/enthusiasts who will defend their position that the moisture in human breath will likely cause no damage to an NES cartridge, based on what I’ve personally seen over the past 20 years, I not only disagree with them, but feel strongly that the connection/correlation between blowing into an NES cartridge and the potential for long-term effects including wear, corrosion of the metal contacts, mold/mildew growth, is sound logic.

So, what was really happening? “The act of removing, blowing in, and re-seating a cartridge most likely creates another random opportunity for the connection to be better made. So removing the cartridge 10 times and putting back in without blowing on it might net the exact same results as blowing on it between each time.”