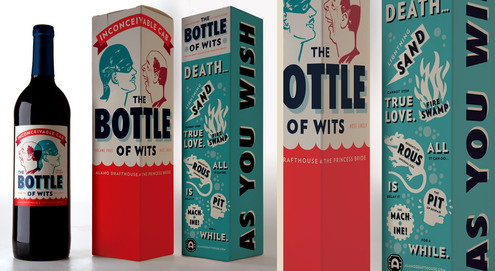 There’s nothing like one of your favorite things from childhood (The Princess Bride) joining hands with something you love as an adult (great design) for the purpose of something you like plenty (wine) at something you strive to support (independent movie theaters).

Enter The Bottle of Wits, which is each of those beloved things, and probably more. 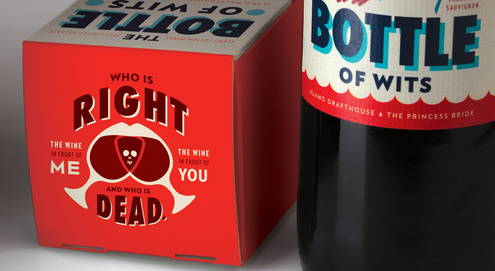 In looking at developing an identity for Alamo’s in-house branded wines, we quickly decided that it would be impossible to sum up everything that makes the Alamo unique in a single packaging system. Why not redesign the wine each year, based on a film that aligns with the brand?

Alamo’s 2012 offering became two wines inspired by The Princess Bride, in honor of the 25th anniversary of the film. As fans will recognize, “The Bottle Of Wits,” is derived from the iconic “battle of wits” scene when Westley first rescues Princess Buttercup from Vizzini and his henchmen. The custom wine line includes two varietals: “Inconceivable Cab” and “As You Wish White”.

“The “Battle of Wits” sequence between Cary Elwes and Wallace Shawn easily stands toe-to-toe with “the Sideways Spit Bucket” and “The Silence of the Lambs Chianti slurp” as wine’s shining moment in film,” said Alamo CEO and Founder Tim League. Workshop worked to pack the full scope and wonder of the film experience into the packaging. 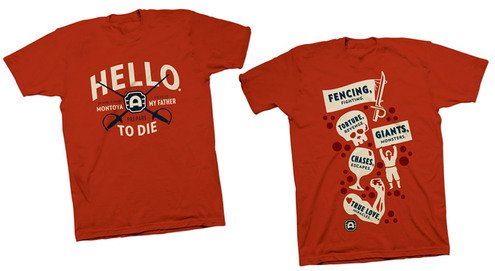