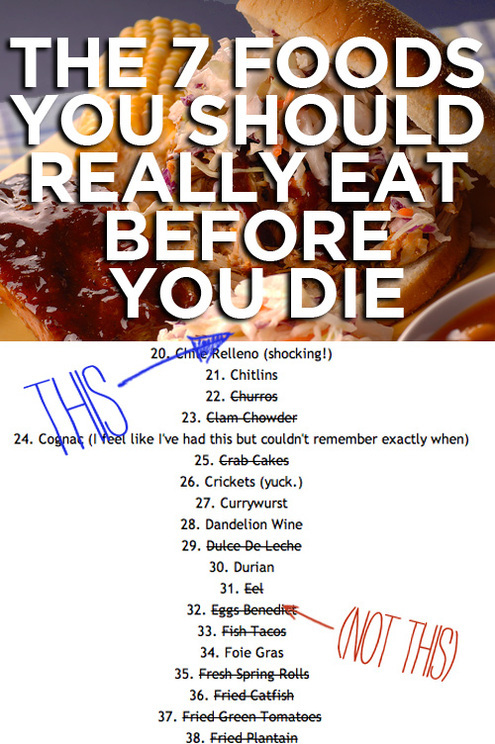 There’s a current micro-meme that’s found its way all over Facebook and the blogosphere, in which there appears a relatively generic alphabetical list of somewhat less-than-dominant foods with the title, “The 100 Foods You Should Eat Before You Die.”

In the words of Time magazine’s Josh Ozersky, the list “looks like it took about six minutes to think up. You could have created the whole thing while listening to ‘Aqualung.’ It’s simply a bunch of unconnected foods, listed alphabetically, without any kind of qualifier.…The fact that almost any food can be wonderful or inedible, depending on where it came from, how old it is, who cooked it and approximately 800 other factors, seems not to have occurred to the person who wrote it, or to the millions of people who have passed it along viral social media.”

But, the list got Ozersky thinking about a collection of seven non-location specific food experiences that everyone should have, preferably multiple times.

The list excludes geographically scarce delicacies like Scottish langoustines or Umbrian truffles, which are magnificent, but by no means the stuff without which a life can be called incomplete. And weird or hard-to-like dishes are out too: the world is full of acquired tastes, but nobody regrets on their deathbed not having eaten more durian. These foods listed below, however, are the ones you should eat often and rely on for your happiness and sustenance. You need to have the good version of them before you die — or sooner.

7 Foods You Should Really Eat Before You Die