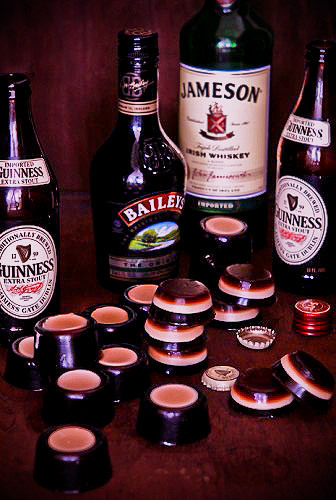 It’s March 15th, when means you’ve plenty of time to prep for proper St. Patrick’s Day celebrating. And while everyone’s gonna show up in thrifted green cardigans and plaid golf pants, Guiness (or, hopefully, Bushmill’s) in hand, you can show up in whatever you want, and ain’t nobody gonna pinch you:

The Irish Car Bomb is a boilermaker cocktail variation, in which Jameson’s Irish whiskey and Bailey’s Irish Cream are dropped into a nearly full pint of Guiness. The milk solids in the Bailey’s will begin to curdle, so one is forced to drink the cocktail as fast as possible, or it will begin to taste incresingly terrible and feel pretty awful in your mouth.

Which is too bad, cause the flavors actually compliment each other well, and it could be savored and rather enjoyed rather than downed as quickly as possible. Which is why you should totally make Endless Simmer’s chewable Jell-Oish shots, and enjoy the cocktail through whole albums worth of The Pogues and the Dropkick Murphys.