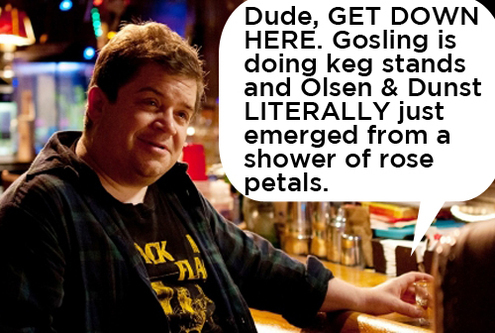 On Tuesday morning, Patton Oswalt awoke to learn that, despite the potential buzz, he had not been nominated for his solid performance in Young Adult.

So, he did the next best thing: he hit up Twitter, and imagined a scenario in which he and other performers snubbed for the awards, such as Tilda Swinton, Albert Brooks, Ryan Gosling, Kirstin Dunst, and Leonardo DiCaprio rent out Legoland for an alternative soiree.

See you later tonight. Might be out of booze — Serkis has Pogues on the jukebox & Fassbender just showed up in a pirate hat.

Oh shit — we’re DEFINITELY going to run out of booze. Charlize & Tilda just pulled up in a stolen police car.

Dude, GET DOWN HERE. Gosling is doing keg stands and Olsen & Dunst LITERALLY just emerged from a shower of rose petals.

Nolte & Plummer just drove past, mooning us. Serkis & Tilda are signing “Is There Life on Mars?”

Oops — Von Trier just pulled up in a pass van dressed as Goering. “Let’s go to Legoland!” With a boozy hurrah, we’re out!

Oh. My. God. Just pulled up to Legoland. DiCaprio’s rented the park for the day. Dibs on the Duplo Gardens! #andscene

And apparently, Swinton is totally up for a Bowie duet with Andy Serkis:

Oh, how fun! Is he there now?” she said. We explained that it was merely his Twitter feed. “But is it real? We should go! Where is he?” she asked, grabbing for her keys and heading for the door. Actually, we explained, he was kidding. “Oh, he’s making jokes. What a shame. I think we should do it for real. How faaabulous!” she said.

Read more on Vulture, and at @PattonOswalt

Screen cap via The Daily Beast