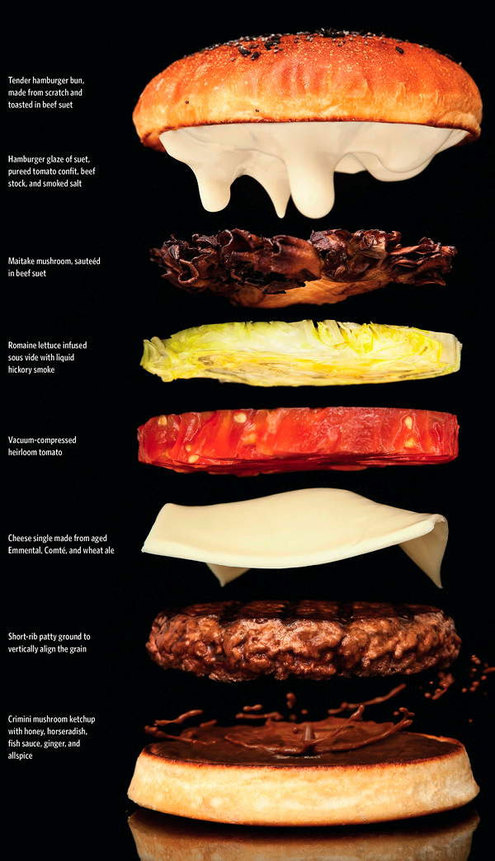 “The Ultimate Hamburger,” from the Modernist Cuisine project by Nathan Myhrvold and Maxime Bilet, took stock of what most people crave in a burger – a perfectly fluffy and toasty bun, crunchy-but-not-too-crunchy veggies, gooey but flavorful cheese, loads of umami notes from ketchup and other sauces, and the perfect, beef-y patty, and used some serious cooking science to make it a possibility. Gizmodo reports, “The chefs carefully looked at what people wanted in their burgers and built something in line with that style of texture while massively improving the taste and quality. With the cheese, they re-created the quintessential feel of American cheese with flavors more similar to gruyere and cheddar. With the patty, they ground the meat and kept each strand parallel to each other so the flavor would be consistent with every bite.

They then cooked the burger by cryofrying, a method that involves first sous-viding the patty in a Ziploc bag, then searing it in liquid nitrogen and then frying it in oil. It’s the most complicated way to make a burger but it looks so damn good I just ate my computer screen.”

Watch the video below, and then check out the Wall St. Journal‘s interactive graphics.

The Ultimate Hamburger from Modernist Cuisine on Vimeo.