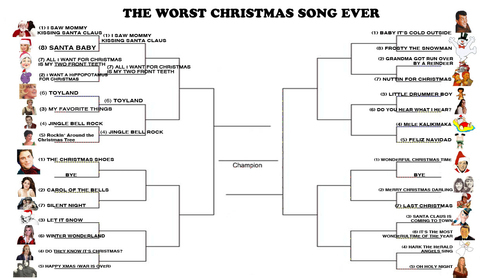 But it also means the less-desirable holiday music…the schmaltz, the breathy vocals, the Josh Groban.    Jezebel has decided to take a poll, and figure out the worst Christmas song ever.

Herewith, the definitive tournament. Your votes will determine which song takes home the crappy crown.The search will span from now until the week before Christmas and consists of 30 first round selections pitted against each other in a single elimination tournament. All 30 songs have been seeded based on the general level of hatred expressed toward them in an informal survey of friends, the Jezebel staff, and opinionated family members. Two of the top-seeded songs were deemed so terrible by the nominating committee that they face no competition in the first round.

Clearly, the winner has to be “Christmas Shoes.”