Some men are hat guys. You know, like that friend who’s hair you never actually saw until you both went to that wedding, like a decade into your friendship?

And some men are not. I’m certain I should never. I own but one, a stocking cap that I wear only in snowball fights… when everyone looks ridiculous anyway. 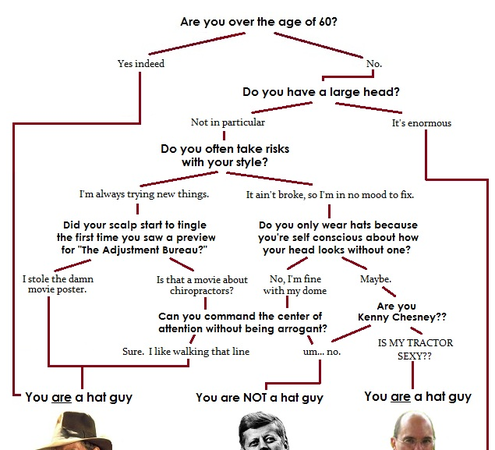 Dappered has created a handy flowchart that helps you determine whether or not you should be donning one regularly. “Pulling one off isn’t easy.  Some look great in a hat, and some guys look like they just left a community theater rehearsal.  Knowing if you’re destined for hat-dom is a battle in itself.  There are exceptions to every rule, but consider this flowchart before you don that bowler.”

How to tell if you’re a hat guy [Dappered]