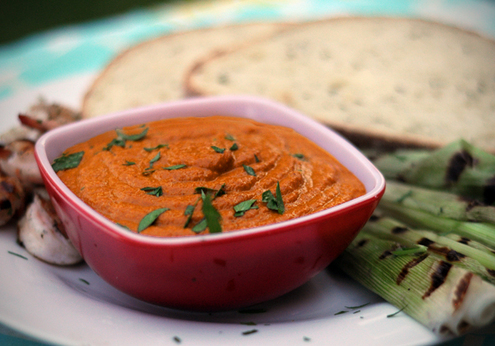 Oh, romesco, you are the bestco.

I don’t generally take pictures of my dinner or culinary creations and share them on ManMade. One, I figure there are thousands of food bloggers who are way better qualified; two, I usually cook in the evenings, and it’s often too dark to take photos; and three, cooking serves as the creative thing I do where I don’t feel required to blog about it. Which I like.

But, there are some things that just need to be shared, and I’ll make an exception to preach the gospel of romesco sauce. This Spanish-standard is a showstopper, and tastes, well, like summer.

And it goes well on everything: certainly, it works perfectly with anything from the grill; grilled shrimps/prawns and leeks are classics. But it pairs wonderfully with all kinds of seafood, other proteins, all sorts of vegetables. I use it as a pizza sauce, stir it in pasta…I even just made tacos with it for lunch.

Seriously, this belongs in your fridge all summer long. It won’t go to waste.

I make this so often, this recipe is in my head. I think I learned it from Jose Andres in an old Bon Appetit or Gourmet magazine that I no longer have. So, let’s call it adapted from Andres’ recipe.

1. Roast the bell peppers over an open flame or under the broiler until blackened. Place in a covered bowl to steam for 15 minutes. When cool, removed the charred skin, stems, and seeds.

2. Meanwhile, toss the onions and tomatoes with olive oil and roast in a 350-degree oven for 45 minutes until soft and lightly charred.

3. Place a tiny amount of oil in a small skillet and set over medium heat. Lightly oil toast the ancho, pressing down until the skin bubbles, about 10 per side. (Don’t skip this. It removes the bitterness). Pour hot (not boiling) tap water into a small bowl and submerge the chile for 20 minutes to soften

Add the almonds to the chile pan, and stir until toasted and lightly browned, about 3-4 minutes.

4. Combine the tomatoes, onion, roasted peppers, almonds, soaked ancho, bread, garlic, paprika, and vinegar in a blender or food processor. Puree on medium speed, and slowly drizzle in the olive oil until a it turns a light orange color. Season with salt and pepper.

Do you have a favorite use for romesco sauce? Post it in the comments below.