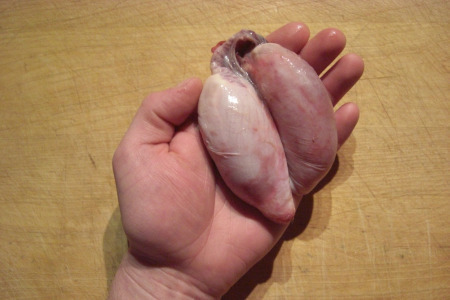 Nose-to-tail cooking is a culinary movement dedicated to eating every part of the animal. UK chef Fergus Henderson and a few of his U.S. counterparts, such as Chris Constentino, are “staunch [proponents] of using virtually the entirety of any plant or animal being served up. Harking back to the days when very little went to waste, [they practice] what [they preach] with such victuals as Rolled Pig’s Spleen, Duck’s Neck Terrine and Roast Woodcock, which is cooked with innards and head intact, the latter providing a bit of “delicious brains.” (From Publishers Weekly)

But, as Ian Knauer of the Atlantic points out, “very skinny-jean-wearing hipster with this month’s issue of Edible Wherever tucked under his arm can settle into a pork jowl or trotter and take one for the Fergus Henderson team.” Those who really commit, the true animal tasters (which, for me, put them way closer to vegetarians than just chicken breast and beef tenderloin eaters), do it all, and that means testicles.The trick to cooking them is understanding the ingredient. “Testicles (and this shouldn’t be surprising) are naturally salty. They also (and this is always surprising) tend to explode. I learned the latter the hard way when my friend Alan Sytsma roasted two pairs a few years ago. Four balls went into the oven; three balls came out.”

Read the rest of Knauer’s article here, then watch the video!