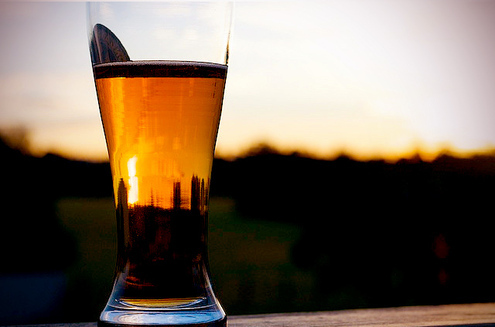 Whenever I’m out and about, and opt to have a beer, my go-to move is to ask, “What are your seasonals.” They way I figure it, the independent and micro breweries that craft seasonal beers do this as their profession. It’s their job to match the flavors and textures of beer to those of the season – the weather, the ingredients available, the kind of food we eat. And while I have a few year-round staples, I’ve found I always get what I want by inquiring re: seasonals.     Turns out, there are both practical and flavorful reasons. Emma Christensen reports,

Back before refrigeration and shipping made it possible to lager beers in the hot summer months and save fresh hops through the winter, some beers were seasonal by virtue of what was available. Brewing was often a fall and winter activity: this was when the new barley was harvested and the workers themselves no longer had to put in long days in the field. The cooler weather also made it possible to store beers for longer, especially high-alcohol beers like stouts and doublebocks. By the next summer, lighter and quick-fermenting beers were brewed with what barley and hops were still left.

Even though we now have the technology to brew a dark, malty beer in the summer months, these seasonal tastes persists. Summers make us crave the crisp, light flavors of pilsners and pale ales. Cooler weather makes us turn to the heavier beers. Breweries brew according to what their customers will want.

Fascinating, right? This whole piece is definitely worth a look.

Summer Ales & Winter Lagers: Why Are Beers Seasonal? [The Kitchn]