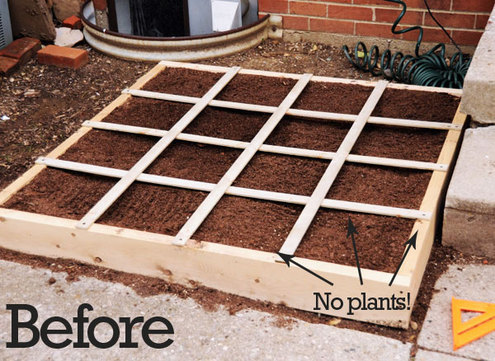 When we last left my tiny 4×4′ backyard, it was, well, a box of dirt. A nice, square, painstakingly measured box of dirt and with flush joints, but a box of dirt nonetheless.

So, for my next project as part of the True Value Blog Squad, I needed to outfit it to support the plants, keep out the pests, and then actually start growing something!

Since the Square Foot Gardening approach was such a great fit for organizing my space, I decided to rely on another trick from that method, the conduit trellis. First, I love that it’s a long-term structure that beats the pants off bendy, rusty tomato cages. Secondly, I was able to pick up at my local hardware store, and, let’s be honest, going to the hardware store never gets old, and it’s way more fun to make stuff. 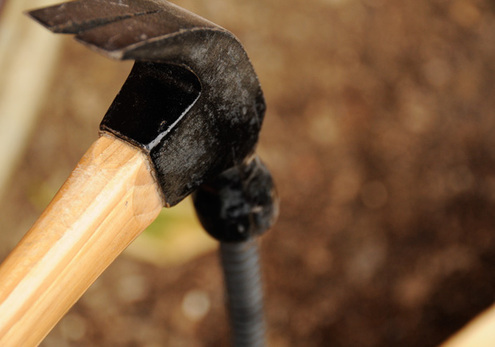 1. Begin by hammering the rebar lengths halfway into the ground, at the corners of your bed. 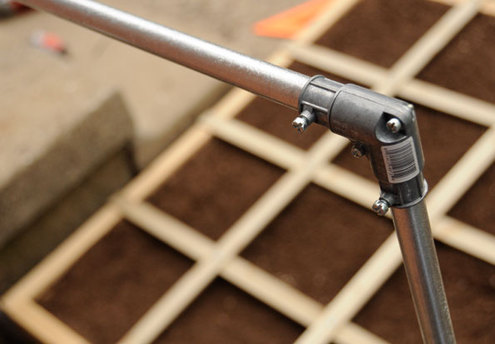 2. Cut (or have cut) the rebar to size. You’ll need at least one length at 4′ for the cross bar, and two for the sides. This can be whatever height you want. I went with 42″, so that the whole thing would stay below the window. (Which is my dominate light source for taking photos of my handmade and DIY projects!) Assemble it into a square using the corner brackets.

Also, lemme add, using conduit as a structure-building material is awesome. I’ve long been a fan of using plumbing pipes to make stuff, but this is so much less expensive. It’s not as strong, and can’t support the same amount of weight, but makes a great metal alternative to PVC pipe for making stuff. Duly noted! 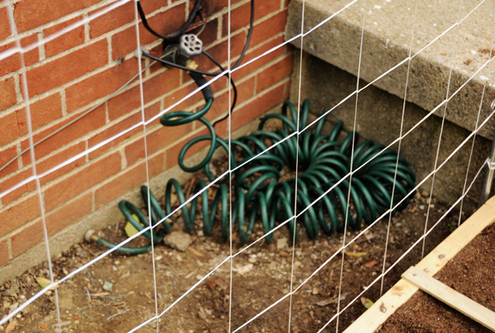 3. Then, attach the nylon net trellis. Snip off the last knots to get a length of string, then use that to tie it to the frame.

Done! Less than $8, and with ten minutes of work.

Keep out the pests

Next, I knew I’d need a solution to keep away critters. I live in an urban environment that’s saturated with squirrels and chipmunks. Those in the suburbs and country with deal more with bunnies and deer, but whereever you live, there are furry creatures, and they want your veg!

I set out to build a cage that would hover over my plants. Since I only have one bed, I couldn’t cover the whole thing with the cage, as that would hinder and snag on the climbing plants I just took care to build a trellis for. So, I decided to make one that would protect a 3×4 space, and take my chances with the back row of plants.

Build a frame out of the 1×2″s that will sit on top of your frame, using the rigid dividers as support. (Another reason I didn’t just draw a line in the dirt, or use string.) Alternate the joints as before, and attach with screws. 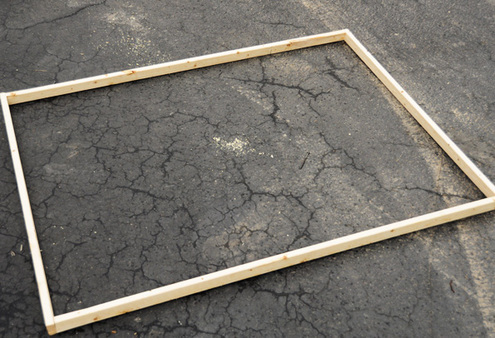 Then build a cube from the poultry netting. I made mine 24″ tall, building up the walls and attaching them with the staple gun. Then, I cut a top piece and attached it with zip ties. Be sure to wear safety glasses and gloves, as you’ll be dealing with sharp metal flying around!

Lastly, I picked up all my plants from the annual sale from my local master gardening association. These are local folks who have experimented with which species and varieties grow best in your area/zone, and they know what they’re talking about. 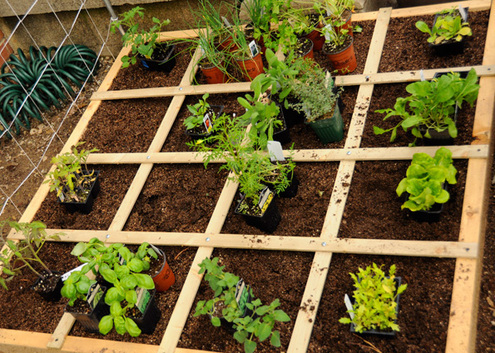 I laid everything out, and made a map to take notes of what sat where. (I hate those little white plastic marking tags. I can remember 16 spots!) 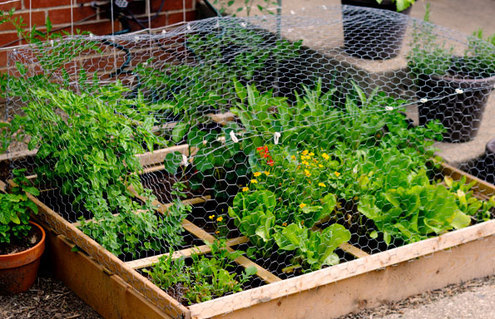 I also picked up a few large pots at True Value for growing herbs that have a history of taking over, like mint, as well as some winter herbs I want to bring inside when the frost hits.

If the photo isn’t clear, this thing is flourishing. I’m using WAY less water, and my plants are doing a million times better than planting in rows in the ground. 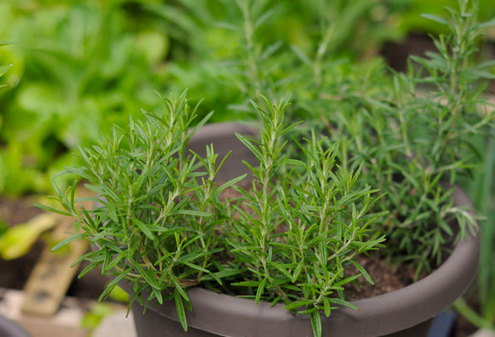 There’s a lot of produce for a mere 4×4′ space. I’m sure the blazing 95-100° temperatures mixed with consistent rain is helping a lot, but it looks great. 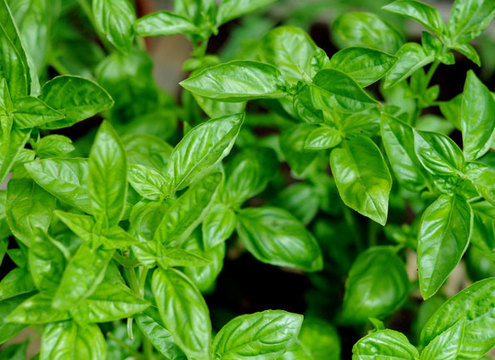 I know you can buy raised bed solutions at the garden center, or use any number of containers to grow stuff, but I love having a dedicated, reusable solution that I made myself, using stuff from my local hardware store.