You’ve seen it on TV and in the movies hundreds of times. The hero arrives, and with one swift kick, they break open a locked door. If the villain is at the door, he’ll eventually get through, but it takes more than one kick if it’s the bad guy at the door.

The reality is that most outside doors and nearly all internal doors are very easy to break down. The only thing stopping the door from being broken open is the thin lockset with just an inch or so of metal sticking into a wooden frame.

Pine or fir is the primary building material in America. Almost every door frame, aside from a few steel models, is made of wood. Doors can be metal, hardwood, solid pine, or hollow-core with most falling into the painted, or vinyl-clad wooden variety.

If you’re trying to reinforce a hollow-core door, don’t bother, there’s nothing that will help, but if you have solid wood, or even better a metal door, you can substantially increase the strength and security of that door with a few simple steps.

Option One: Reinforce the Strike Plate

The first thing to do is to check the lockset (doorknob), and the strike plate against the jamb on the handle side of the door. It’s usually made of brass-colored metal but is often just a thin layer of metal inserted into a hole drilled out of the wood underneath. The easiest way to reinforce the strike plate is to remove the short wood screws that came with the door and screw in three to four-inch deck screws.

These longer screws will go right through the door jamb and into the supporting 2×4 or 2×6 studs behind them. The screws will reinforce the entire door, making it much more difficult to break open. While you’re at it, replace the hinge screws with the same longer deck screws.

Another method of reinforcing the door is to install a deadbolt.

Grade three is the weakest and the standard for builders in home installations. It is designed to withstand a 150-pound weight forced against it, and handle two-heavy strikes with a hammer without breaking.

A grade two deadbolt can take a 250-pound weight and five-hammer strikes.

The best, the grade one deadbolt, can handle 10 strikes with a hammer and a 360-pound force against the door.

If you’re worried about keys, you can install both door locks and deadbolts with a 10-key pad that allows a code to be entered to open the door.

When the steel frame of this “pre-hung” door is installed, use the large deck screws to mount it deeply into the surrounding studs.

With the door in place, added the grade one lockset and deadbolt. Not all steel doors come with heavy, high resistance strike plates, if yours does not, purchase a stronger strike plate and once again, use the longer screws to mount it.

These precautions, simple at first, the increasing cost and strength can provide a much higher level of security to your home without that much effort in time or money. 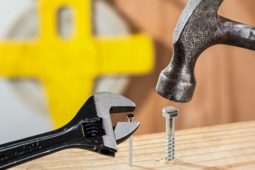