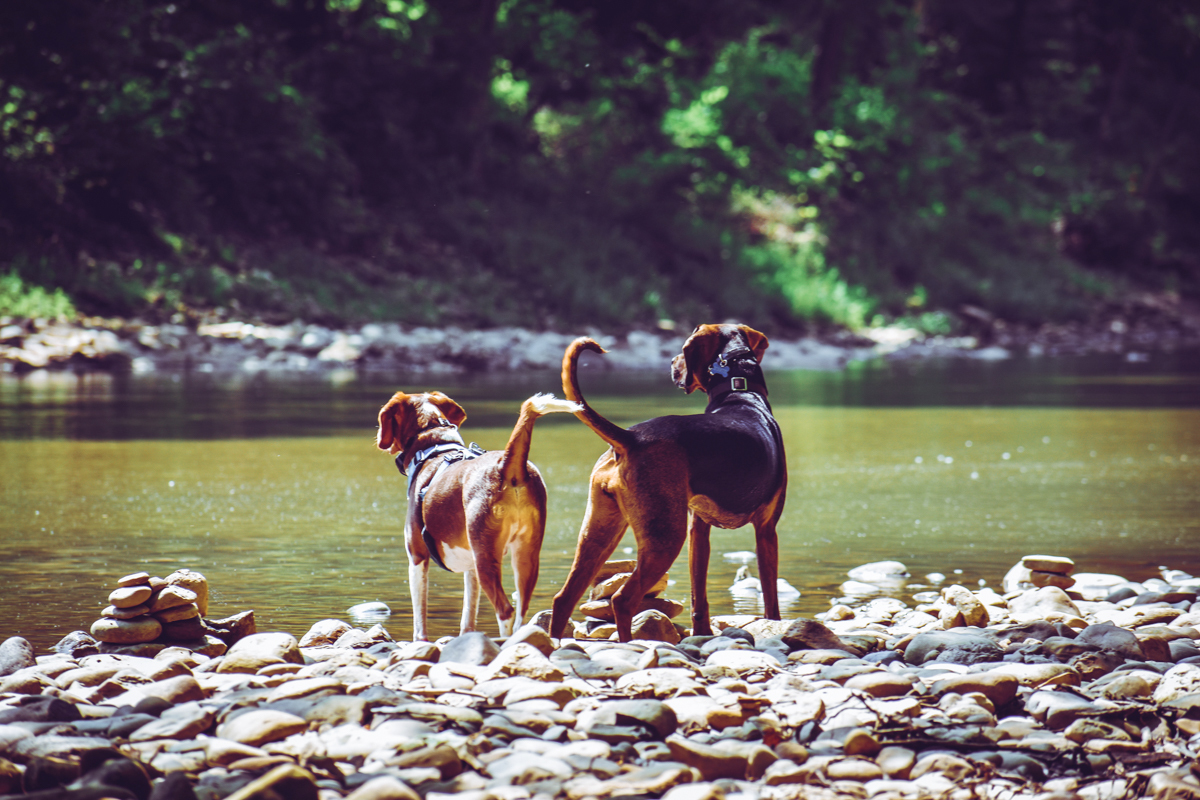 Friends are important. And long-standing friends are so rare and so precious that they can hardly be overvalued. But if humanity, as a species, were to name one friend that had been there since the very beginning, it would be certainly be…well, dogs. They were our evolutionary companions from early on. They are a part of our mythologies, our legends, and our tall tales.

But while we can imagine that people have always loved their dogs, there's actual evidence to back it up as well. As Indiana Jones would tell you, archeology is the path to many abilities some would consider to be unnatural. (Wait, I think I messed up that quote. Anyway.) 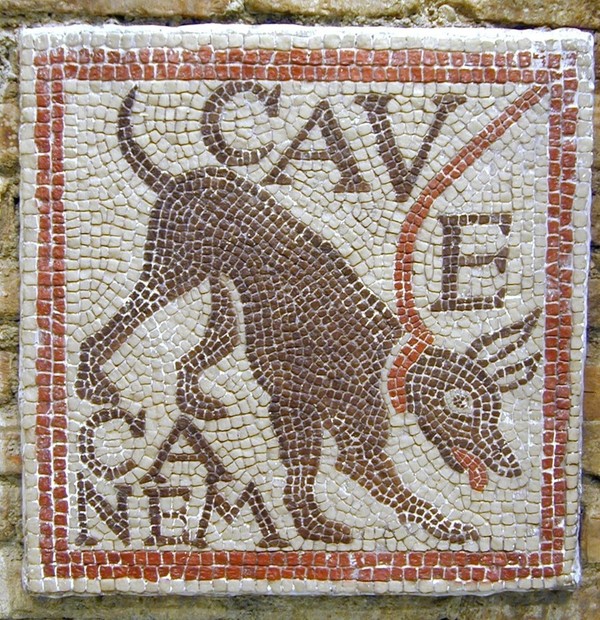 We have records––thanks to archeologists and historians––for how people used to love and care for their dogs, and it comes from the epitaphs that they wrote on the graves of their four-legged friends. And just to be clear, if you think WE love our dogs now when we post them on Instagram and Facebook, can you imagine what's going through the hearts of these ancient people who spent serious money to carve their affectionate words into stone. Here are some to warm your hearts.

Pearl, the Dog from Gaul 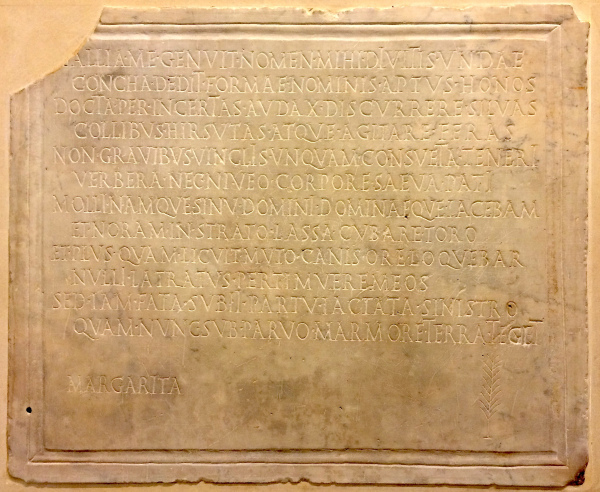 One of the most famous remains is about a dog name “Pearl” (Margarita, in Latin), who was a lap dog to a wealthy woman in what is modern day France. Look at the details and the simple, home elements here––an active dog that liked to chase, but mastered laying sprawled out on a blanket? Sounds like dogs I know. (Also notice how this is written in the first person view of the dog––something that happens in other epigrams too.)

Gaul sired me, the shell of the rich sea gave me my name: the honour of that name is becoming to my beauty. Taught to roam unexplored woodlands with courage and to chase hirsute game in the hills, unaccustomed ever to be restrained by heavy harnesses or to endure savage beatings with my snow-white body: for I used to lie in my master’s and my mistress’s lap and mastered the art of resting wearily on a spread-out blanket. Even though I used to be able to express more than I was entitled to with my inarticulate mouth – that of a dog! –, no one feared my barking. But I have already met my fate, stricken down during ill-omened whelping – me, whom earth now covers under this little marble plaque. 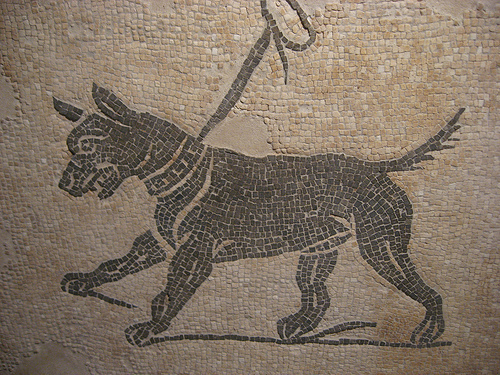 Some people wrote in their own voice and were much more frank about their feelings. It also turns out we've been ascribing human qualities to our pets forever.

“My eyes were wet with tears, our little dog, when I bore thee (to the grave)… So, Patricus, never again shall thou give me a thousand kisses. Never canst thou be contentedly in my lap. In sadness have I buried thee, and thou deservist. In a resting place of marble, I have put thee for all time by the side of my shade. In thy qualities, sagacious thou wert like a human being. Ah, me! What a loved companion have we lost!” 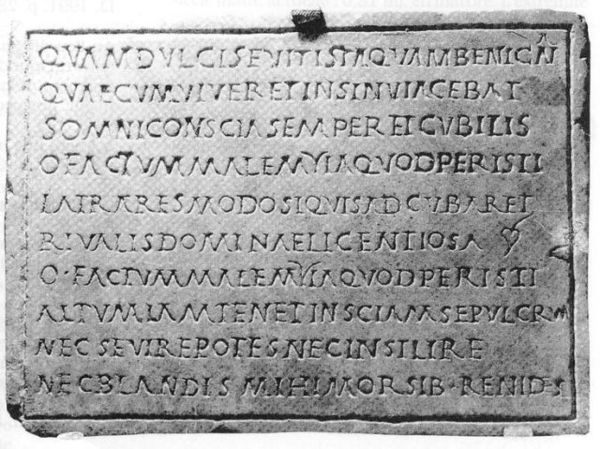 Ancient people thought a lot about the obedience of their pets in terms of their quietness. But the juxtaposition of their silence in life and death was not lost on them either.

“[Myia] never barked without reason, but now he is silent.”

The celebration of Myia's life continues:

How sweet and friendly she was! While she was alive she used to lie in the lap, always sharing sleep and bed. What a shame, Midge, that you have died! You would only bark if some rival took the liberty of lying up against your mistress. What a shame, Midge, that you have died! The depths of the grave now hold you and you know nothing about it. You cannot go wild nor jump on me, and you do not bare your teeth at me with bites that do not hurt. 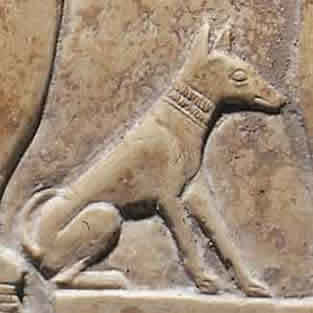 Hunting dogs were beloved as companions and fellow-heroes, and they were celebrated as such. Even to ancient ears, the following is pretty overblown for commemorating a dog.

“Surely even as thou liest dead in this tomb I deem the wild beasts yet fear thy white bones, huntress Lycas; and thy valor great Pelion knows, and splendid Ossa and the lonely peaks of Cithaeron.”

As a final bonus, there is this extraordinary epitaph in praise of a domesticated pig that was “a friend to everybody.” Mary Beard has a long take on the context and venue for this epigram, but the story seems to be that this poor creature was run over by a chariot, as depicted on the relief image. Seems like a cute little hog.

A pig, friend to everybody
a young four-footed one
here I lay, having left
behind, the land of Dalmatia
as an offered gift,
at Dyrrachion I walked
Apollonia yearning
and all the road I crossed
on foot alone steadily.
But by the force of a wheel
I have now lost the light
longing to see Emathia
and the Phallic Chariot
Here now I lie, owing
nothing to death anymore

Its a lot of mortality and heroism to ascribe to an animal. But it seems to have been some pig.

Allan
Allan Georgia lives in Cleveland, OH, where he consumes more coffee, whiskey and noodles than he should. But he's working on it. He loves thinking about big ideas and seeing the virtues in??very ordinary things. He writes on C/culture and religion when he is not trying to make things without burning??himself or smashing his fingers o[...]
Next Post
101 animals archeology dog dogs education history lifestyle outdoor pets talk