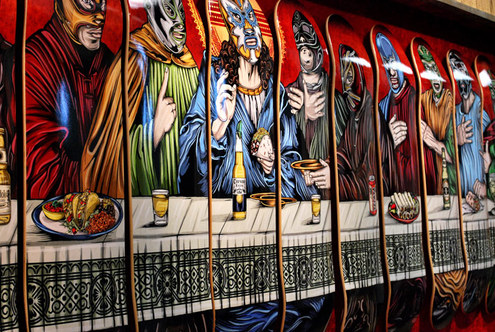 Tonight is Passover, which makes this Thursday “Maundy Thursday,” the celebration of the “last supper.” This event has been most famously recorded by Leonardo Da Vinci as a buncha dudes sitting on one side of a super long table. [Fun fact, it’s likely that they were lying on their sides in a square, in order of status. Neat, huh?]

So, while Leonardo’s version is most famous, it’s also dead wrong. So, since it’s so historically unlikely, and obviously an artistic interpretation, why not have a little fun with it.

You know, by depicting the disciples as Lucha Libre wrestlers and painting the whole thing on skateboards. Yeah, that oughta do it.

The Last Fiesta is designer and illustrator Chris Parks “ 12-skateboard deck shout-out to Leonardo da Vinci’s ‘The Last Supper’ with Jesus Christos and his 12 Luchador apostles getting down one last time. This piece was created for my solo exhibit Saints & Sinners, here at the Pale Horse Studio. Hand-made shadow box by Casey Paquet.

Christos Mysterio is also the latest edition to the Pale Horse t-shirt line and like he told his apostles at the last supper, he won’t be around for much longer! Grab your tee here.“ 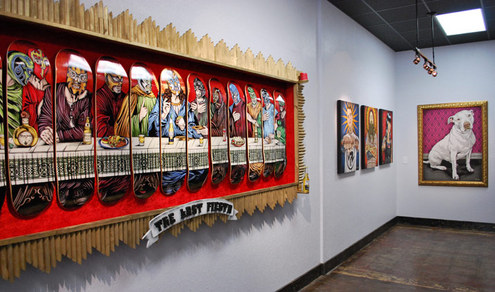