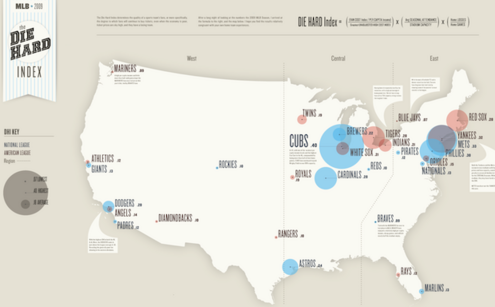 The Cubs are the clear winners, then the Mets, Yankees, Phillies, and the Red Sox in fifth (really?!) Also, “What really strikes you about the chart, though, is how unbelievably bad the fans are in almost every city without a super-old baseball team. The Arizona Diamondbacks, Colorado Rockies, Atlanta Braves, Toronto Blue Jays, and Texas Rangers have pathetic fans. Which makes you think: Baseball’s continued rep as America’s game really seems driven by a few old cities, where rooting for the home team is a tradition passed down through generations.”