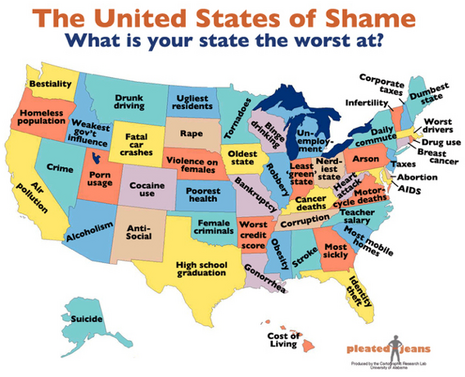 Late 2010 and early 2011 have been all about the infographics, and topographic roundups of a state’s signature ________. We’ve seen food, and favorite films, but this latest release takes a different approach: Identifiying some of the worst characteristics.Most are seem pretty shameable, but check out my home state of Ohio: Nerdiest state, based on library visits per capita? I realize that libraries are often used by low income persons for free media and access to info, but we’re not the state with even close to the highest poverty rate. Library visits don’t make Ohio nerdy, it makes it awesome! Especially since my own local system, the Columbus Metropolitan, is consistently rated as library of the year.

“Rationale and statistics: Most stats taken from https://www.americashealthrankings.org/ and https://www.census.gov/compendia/statab/rankings.html “