We're living in a golden age of food media. Between exceptional print magazines like the gone-too-soon Lucky Peach and Bon Appetite, to Netflix shows like Chef's Table and PBS's Mind of a Chef, to David Chang's recent discussion of a developing food media empire, there is just so much professional-level food edu-tainment that an interested viewer need never go hungry. 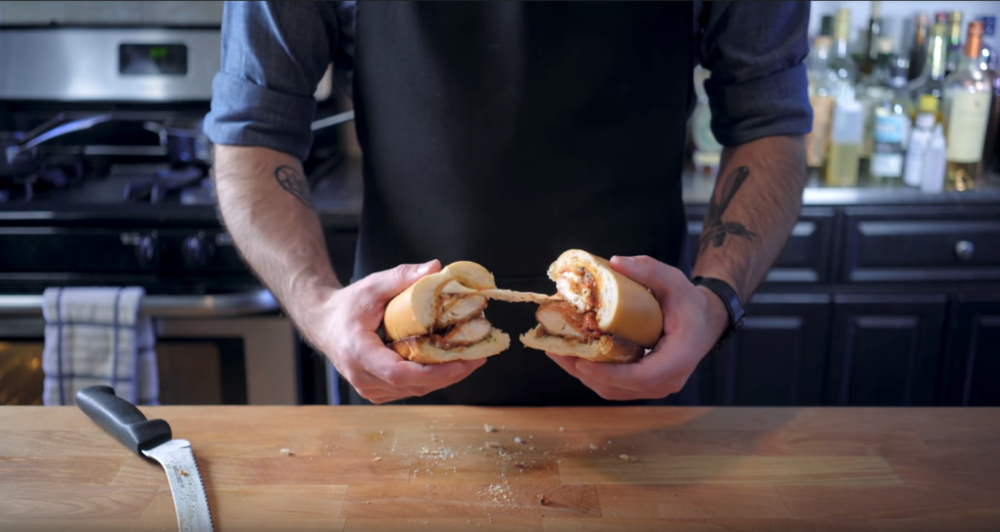 And yet, even though the space is saturated with quality content, amateur programs are still finding their niche in online forums.  And no online food program has had the success enjoyed by “Binging With Babish,” the web show performed and produced by Andrew Rea, who is as skilled with video editing software as he is with a kitchen knife and pasta fork. The premise of the show is that Rea recreates (or tries to) food from television, film, or video games. As you can imagine, there are rich opportunities for food made from popular media, and Rea hits some amazing highlights. His rise in the online cultural landscape has been so meteoric that its possible that his show isn't news to anyone. But in case you haven't been introduced, here are the first five episodes you should watch before you go back and binge the entire show.

This was the episode that I saw when it first aired that really demonstrated that this program was something special. It wasn't simply the whimsy of trying to re-create this recipe, or the serious way that Rea took the language and specifics offered by Kevin's doomed chili recipe. It was when he served it on scrap, gray office carpet to truly capture the authentic ambiance of the recipe's context on The Office. Note that, as Rea has gone forward, there is almost never an episode where he doesn't employ Kevin's language of ingredients that are “getting to know one another.”

Proof that Rea is always willing to go the extra mile, when he tackles the plot-centric Thanksgiving sandwich from Friends, he does not begin with the ingredients of a completed Thanksgiving dinner, he begins with the ingredients to make a complete Thanksgiving dinner. It is the most laborious effort offered solely in service to a sandwich that I can imagine, but in the process the show demonstrates solid technique for throwing together a delicious Thanksgiving meal as well as the sandwiches that inevitably follow after it.

Not having been a fan of Adventure Time before watching this episode, I didn't initially have a lot of context for what Rea was doing. So about halfway through the episode––right around when Rea is harvesting his own tears to fit the rigors of authenticity––I looked up the scene that Rea was recreating. And I have to say that this might be the most cartoonish food item I can imagine actually being recreated in the real world. Ostensibly, making and eating this sandwich from Adventure Time should be the food equivalent of painting a train tunnel onto a rock and having it become and actual tunnel. It shouldn't exist in the real world. But damned if Rea doesn't absolutely put together this punchline of a sandwich and actually attempt to get his face around it. (You should also catch the real-life re-creation of another brief Adventure Time recipe and song, “Bacon Pancakes,” which has now become that tune that gets stuck in my head at the most inopportune times.)

The result of this recipe recreation is, predictably, disgusting––even from the safe distance of a web browser, you can imagine the musky, gamey smell of the hell-hash that Rea makes. But if dedication and fearlessness is any kind of quality in a program like this, no episode captures just how committed Rea is. To try and make this concoction, Rea takes his viewers along to a specialty meat shop where he gets his hands on all the usual ingredients, along with items like kangaroo, snake (2 kinds), bull testicles, camel and so on. And as if that wasn't ridiculous enough, he gets out a household style meat grinder to tackle it all. The commitment to his concept is real. And this episode is as real as it gets.

Big Night is a classic, and this dish is its centerpiece. Rea's take on it is so thoughtful and his production is so honest about the work involved that this episode really becomes something special. When Rea shows his own middle-of-the-night delirious efforts to finish making hand-shaped garganelli, he is vindicating every one of us who has gotten too deep into a project too late into the day and found ourselves awake at 4AM wondering where it all went wrong. But at the same time, the many ingredients come together into the titular timpano and creates a visual that makes it clear that his efforts (and ours!) really are worth it. You can feel the love in this one.

Binging With Babish continues in production, with new shows every week, and the episodes I haven't mentioned are at least as awesome as those I did. Happy watching!