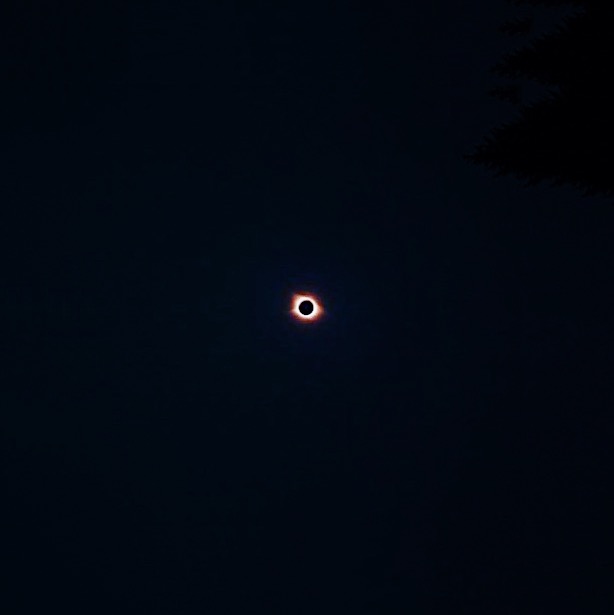 1. The Astronomical Event: The 2017 Solar Eclipse

A lot of people are talking about this today. Consider me among them. My house is only 45 minutes from the “path of totality,” which means two things – 1) the epicenter of the event, with planning, was extremely physically close and accessible and/or 2) what I would have seen from my front yard is 99.3% of the real deal. Is that good enough?

In most situations, I'd say — yeah, 99.3% is pretty darn close. And you can avoid the crowds, the hassles, and the traffic jams. But, in this case, that .7% made all the difference.

So, we headed out on Sunday, to Madras, Oregon, the premier place identified by experts to see the eclipse. (Dead center in the path of totality, and the least chance of clouds or other weather to obscure the sky.)

… Madras, where NASA itself decided to host its event.

… Madras, where teams of scientists from all over the the world set up their equipment to monitor the event.

… Madras, which is accessible only by two-lane mountain pass state routes that were guaranteed to clog with traffic.

I'll share the details with you if you want. Email me. Yes, it was crowded, but not unbearably. Yes, I stood in line for an hour and fifteen minutes to use the filthiest portable bathroom I've ever been in. Yes, the traffic on the way out was truly ridiculous. (We did arrive there with no problems). Yes, the volunteers running the thing had no idea what they were doing. Yes, my neck still hurts from spending the night in the car.

But — and I have no other way of saying it — it was completely amazing and totally worth every, dust-covered second. The people there became a real community, they helped each other out, they bonded, they shared their supplies, telescopes, and food and water. That bathroom line led to completely enjoyable 1:15-long conversations with folks from all over the west. And. the. moon. covered. up. the. sun. entirely. for. more. than. two. minutes.

It came. Just like they said it would. The light was insane. The shadows unreal. I stared directly at the sun at 10:20 in the morning, and it was among the most beautiful things I've ever seen.

The older I get, the more I struggle with the calculus about going to big, crowded events. Is that concert really worth $50 a ticket, plus fees? Do I really want to stand on my feet for six hours through two opening bands and not have the headliners start until after 11:00pm, meaning I don't get to bed until at least one or two on a work night?

But, when I go. I never regret it. I don't remember the traffic jams. I remember the event that I signed up to see. The eclipse reminded me that when I say yes, I always find it worth it.

2. The Interview: Billy Bragg in conversation with Terry Gross

Here's my take on Billy Bragg before listening to this: I like him. He's really important to a certain lineage of roots music that I'm particularly interested in. I'm glad he's out there. He's had a thirty-plus year career and I'm familiar with some of his song, but I certainly haven't heard most of his catalog.

Here's my take on Billy Bragg after listening to this: Billy Bragg is the most fascinating, well-spoken musician of all time, and I should listen to him non-stop.

I exaggerate, but just a bit. The truth is: it's a great forty-five minute conversation. Bragg is incredibly evocative with his language, but always approachable and easy to listen to. Terry Gross is obviously charmed by him. She's at her best when she lets her guard down a bit and allows herself to become a bit giddy.

Worth a listen, even if your not a huge fan of either Fresh Air or Billy Bragg. It's simply great audio, period. 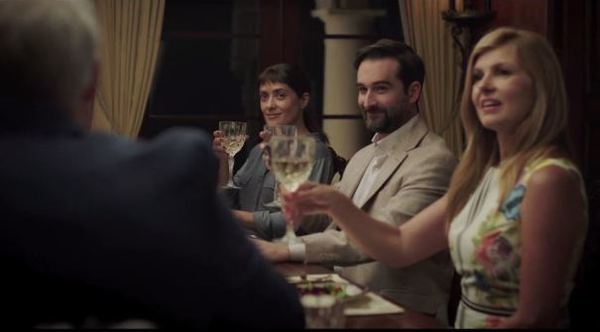 3. The Film: Beatriz at Dinner

This one truly blew me away. It's one of the most interesting movies I've seen this year.

Not a single line of dialog in this movie is wasted. There's so much control present in the filmmaking here. Everything is intentional, purposeful, and contributes to the desired tone. Every actor delivers every single word exactly the way they should. Hayek and Lithgow get the biggest gems, but both Connie Britton and Amy Landecker manage to pull up both a creepy/disgusting and yet sympathetic vibe that totally blew me away.

The reviews seem to think it's “pretty good,” though users don't seem to give it as high praise of the critics. It might be because it was released the same year as “Get Out” They're great companion pieces, for sure.

Maybe it's because I've seen all of Miguel Arteta's previous movies, and liked them. Maybe I think Mike White is a particularly interesting screenwriter. Maybe it's because I was on a really nice date night with my wife, on our first evening out alone after having had house guests for nearly a month. It might have even been the two especially good Oregon beers I sipped during the run time. But I really, really loved this as a piece of filmmaking, and an avenue for serious performers to be great. I think you should see it too.

Honorable mention: I watched Nocturnal Animals last night. I think it's pretty solid, and worth a watch. It's streaming now on HBO if you have access. 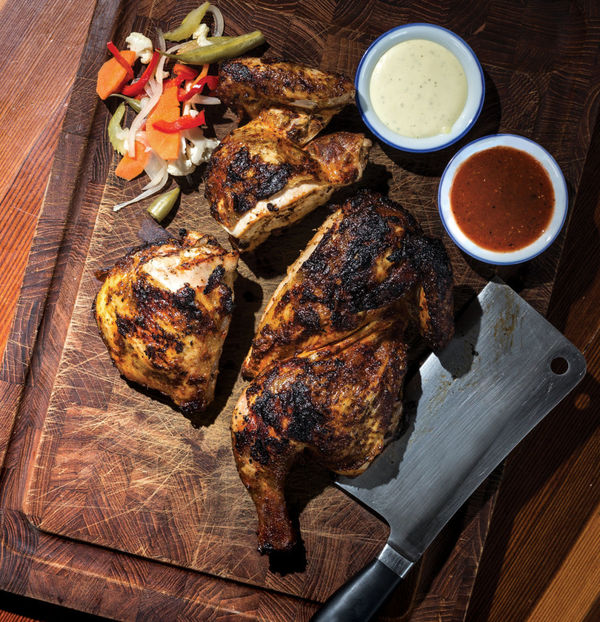 This is the dish I have been craving all summer. I made it early in the season, and many times since, and I'm certain it will become a go-to when having friends over for a grill night.

It's from a local Portland restaurant, that I have not been to. Tragically, the building that housed it experienced an electrical fire a riff a few weeks after opening.

The recipe on Alabama-style barbecue chicken, meaning it comes with a white, mayo-based sauce. That might sounds crazy, but it amazing as it caramelizes and blackens over high heat at the last minute. (Mayo, is, basically just oil and eggs, so not really that nuts.) I've made some adjustments to make it simpler to prepare on the regular in smaller batches. I'll use whatever fruitwood or hickory smoking woods I have on hand. I don't always do the Fresno pepper sauce, though I do like it, and sometimes I'll just brine or use a simpler rub to make it happen faster.

But – it's good stuff, and anyone who eats meat will love this, we promise. Throw in a couple extra thighs or leg quarters to make sure you have plenty of leftovers to go with the sauce. 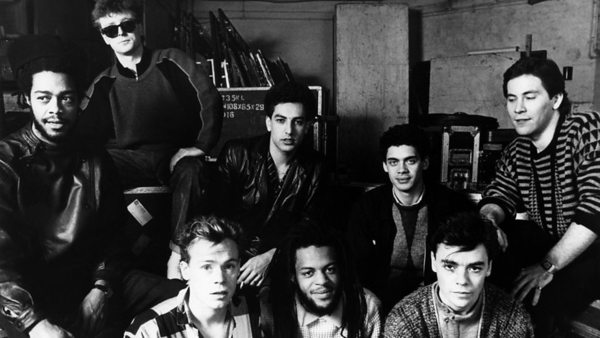 Here's Hit Parade from Chris Molanphy is my podcast of summer: it's the exact right length. It gives you only as much details as you need to dig deep and understand what's happening, and spares you unnecessary details.

What is it? It's a look at music chart history, and an exploration of the cultural context that surround pop music hits: four, so far.

It's a bit hard to find. Technically, I think it lives in Slate's Culture Gabfest feed once a month, but it doesn't show up in my SlatePlus version, so I have to remember to look for it and manually track it down. It's worth it, but the info here is good enough to warrant its own URL.

Here are the episodes so far. Please start in order, even though you don't think you can listen to forty minutes on UB40. You can. 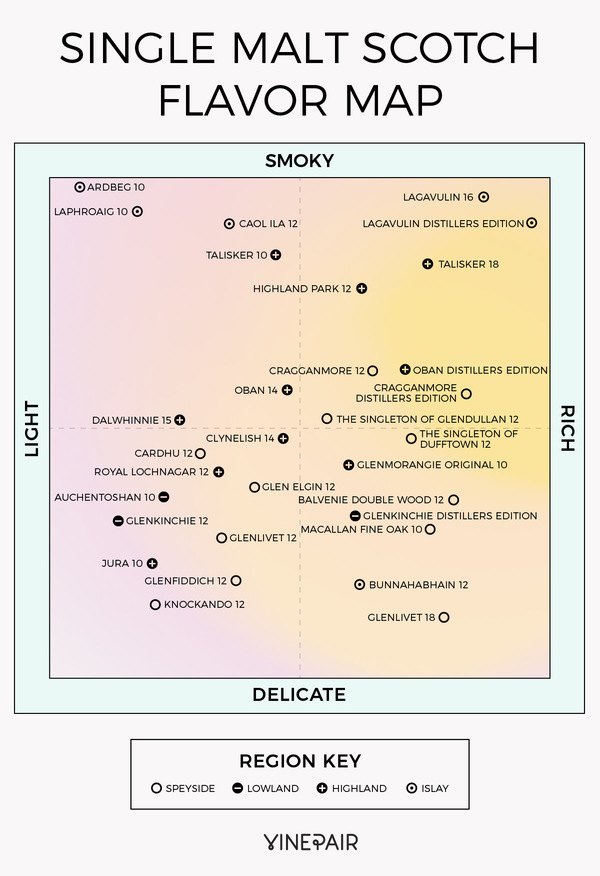 I love summer. Like, a lot. But when the weather starts to crisp and the days shorten a bit, I'll be plenty okay. I have my fall traditions, but the one I'm looking forward to the most is my annual indulgence bottle of whiskey purchase.

I actually don't spend much on liquor. People always think I'm some connesieur, but I think I really just have an interest in learning and opportunity to write about it for my job. I do like higher end stuff, but I really don't drink enough to justify the spending. I have a few sub $25 staples that I keep around, and that's usually it.

But each October, I do treat myself to one $80 or $100 bottle to enjoy as the leaves change and the craziness of the holidays hit. This graphic on Vinepair totally helps me understand why I like what I do. You better believe I'll be consulting it before I bust out the credit card. (Considering that Talisker 18…but it goes for $165 here. Maybe I should see if I can find a glass first. Anyone have any experience with it?)

7. The Good for You Habit: Stretching

I'm hesitant to give any sort of medical advice here, but I do want to share: this month, I have visited the chiropractor for the first time. I wanted to learn proper stretching technique to tackle specific issues, and its completely changed my life. I had no idea how few of my muscles I was using to support my back, and how limited the two activities I do most – road biking and working at a desk – keep me cramped up from the top of my head to the base of my feet.

If you've never been, and your health insurance will make it affordable, I really do encourage you to try it. It's not just about cracking and adjusting, it's about learning lifestyle changes to keep you flexible for as long into life as possible. I'm sold.

The Process: A DIY Wooden Cheeseburger (Free Downloads Inside)