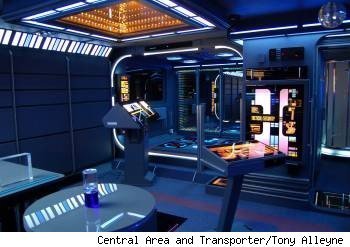 I’d seen Tony Alleyne’s home – which he’s transformed into a replica of the Starship Enterprise – on at least ten home decor/design blogs, and had always ignored it. I don’t know much about Star Trek: The Next Generation (read: Anything besides the fact that the dude from Reading Rainbow is on it and has no eyes, and that I think Whoopi Goldberg had something to do with it…), so I figured I couldn’t really appreciate the good work, since I have no idea how it compares.

But, this week, I saw it again, and I’ve still never seen Star Trek TNG (check out my in-the-know abbreviation. I also learned about DS9!), and I think it’s super cool.

“With no carpentry experience, Alleyne started simple, with the goal of turning one room into a replica of the transporter station. Thinking the project would only last a few months, Alleyne started studying the show, then adding smaller details, like paneling, before tackling larger scale work.  “I was staying up until the early hours of the morning and totally enjoying every minute of it,” Alleyne recounts. “I studied the show to get the scale and color right. It had to be absolutely perfect.” The Transporter Console itself took almost two years to finish. Complete with fader lights that respond to touch, stand-alone computer units that emulate the ship’s navigational systems and of course a replica of Chief Miles O’Brien’s transporter — a creation Alleyne says took three months alone to construct –the console also includes its own cooling system to keep the sci-fi facade operating smoothly.” 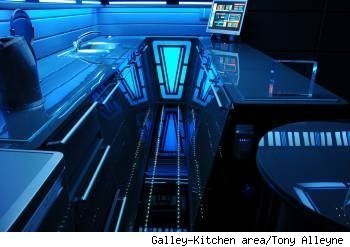 Read more, including how the build, in some ways, saved Tony’s life, at AOL’s Rented Spaces.