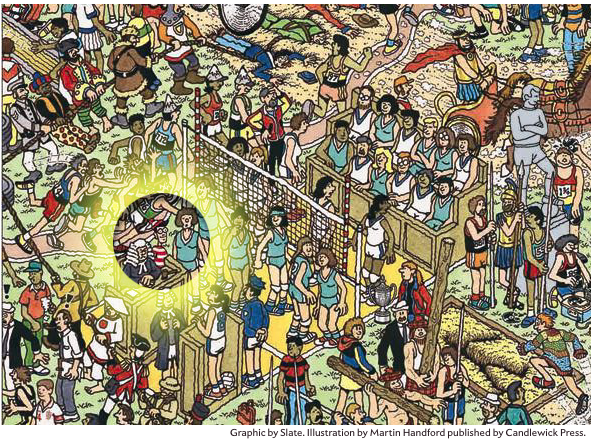 For many years, it was no longer about finding Waldo, but about turning the pages and pointing out where I knew he was, and trying to make it to the end of the book as fast as possible. Cause – between the ages of eight and ten – I had those suckers memorized.

But, that was decades ago, and my visual cues are all gone.And so it’s back to the original question: Where’s Waldo? Turns out, almost never in the corners. and most of the time, he ends up in one of a few key spots. 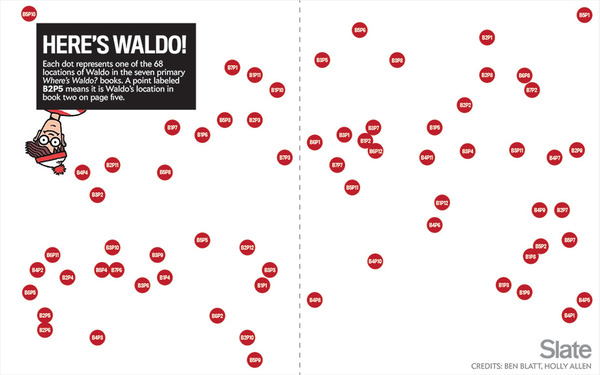 As Slate’s Ben Blatt determined, true randomness is difficult to achieve, and armed with a little knowledge, you can figure out the patterns. More than 50% of the time, Waldo can be located in one of two 1.5″ bands. It boils down to this:

Handford generally shies away from putting Waldo near the bottom or top of a page, which leads me to theorize that Waldo placement is largely a function of two factors: aversion from extremes and aversion from the middle. While we would expect Waldo to be hidden within an inch-and-a-half of the spread’s top or bottom borders almost 25 percent of the time if Handford were placing him randomly, in practice he is there only in 12 percent of all pages. More surprising is the fact that Waldo is also unlikely to be in the middle of the page, as you can see from the map above…I think it’s… likely that Handford was trying to avoid locations that might be construed as too obvious—i.e. the centers or the corners, where children and adults alike might begin their search. But while this might make Waldo harder to find for the reader whose eyes immediately dart to the center or edge of the page, once you know your quarry is unlikely to be in those places, it actually makes him much easier to find.

I still have all my original copies. Off to go put this to the test.