There’s a really weird origin story that surrounds the Collins. And by really weird, I mean some sort of hoax that I’m not quite sure I get. The Wikipedia article leaves me quite confused, but this post at Mental Floss explains a bit better: 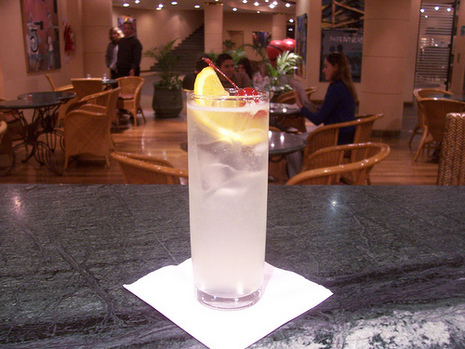 “The Great Tom Collins Hoax of 1874…begat The King of Cooling Drinks, the Tom Collins. The hoax kicked off with a prankster telling a group that they were being talked about by the loose lipped Tom Collins, and then sending them on an angry goose chase to find him.
In 1874, the Steubenville Daily Herald reported that the hoax “belong[ed] to New York, where it was played with immense success to crowd houses until it played out…”. The paper continued, “frantic young men rushed wildly through the streets of the city on Saturday hunting for libelous Tom Collins.” They were often directed to the local bar, where Tom Collins had just left for another bar across town.”

So, sorta crazy, and not sure how funny it is, but, dude, a Collins is a fine drink regardless of its bizarre origin. It’s quite refreshing, perfect for the current heat wave, and adaptable: When made with gin, it’s a Tom Collins; with bourbon, a John Collins; and with vodka, simply a vodka Collins. Here’s how you do it.

1. Combine the gin, simple syrup, and lemon juice with plenty of ice into a shaker, and shake well.

2. Strain into a highball glass (or the thinner Collins glass, if you have them) full of ice, then top with club soda.

3. Garnish with the cherry and orange slice.