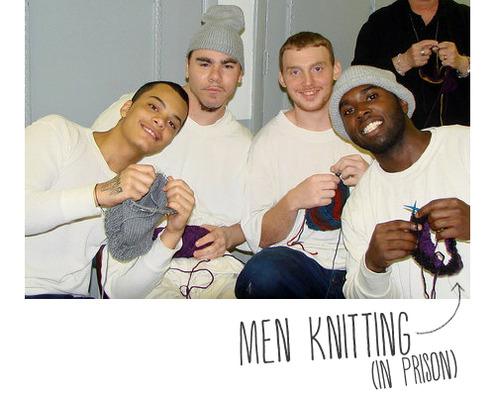 Here’s a little man-crafting feel-good story for your Monday morning: Good.is reports on how knitting has had an incredible positive impact on a group of male prisoners. Whether you’re well-versed in the fiber arts or not, this can’t help but make you smile.

After noticing the calm, zen-like environment of her local knitting club, retired auto saleswoman Lynn Zwerling started a knitting club for male prisoners in a Pre-Release Unit in Jessup, Maryland. Though, persistance was essential to the program’s success:

She was turned down repeatedly. Wardens assumed the men wouldn’t be interested in a traditionally feminine hobby and worried about freely handing out knitting needles to prisoners who had been convicted of violent crimes. Five years passed before the Pre-Release Unit in Jessup accepted her, and Knitting Behind Bars was born. “I [wanted to teach] them something that I love that I really believe will make them focus and happy,” Zwerling says. “I really believe that it’s more than a craft. This has the ability to transform you.”

The men were reluctant at first, complaining that knitting was too girly or too difficult. But Zwerling assured them men had invented the craft, then gave them a five-minute knitting lesson she swears can teach anyone. Suddenly, Zwerling says, the men “found the zen,” and got hooked. Now, every Thursday from 5 to 7 p.m., they come to class, leaving their crimes and the hierarchies of prison life behind.

Furthermore, the program is having a positive impact on the inmate’s experience of prison and their long term success. The assistant warden maintains the men involved are calmer and get in trouble less often, and the article tells the success story of one participant whose involvement with the knitting club aided in his parole, where he know has a job in construction.

And he still knits in his free time.

Read the full piece at Good.Is: How Knitting Behind Bars Transformed Maryland Convicts

How To Graft a Fruit Tree [Your Garden Will Thank You]