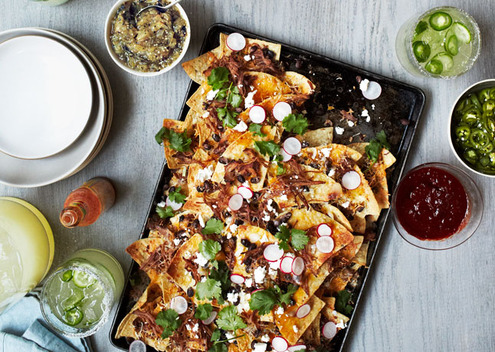 Yeah, the Super Bowl is over. So what. Nachos are the perfect indulgent food and one of those things where if you know a few tricks, the homemade version will blow the pants off of the soggy ones at the local pub.   Why? According to “The Foodist” Andrew Knowlton, it’s all about architecture.

Nachos leave room for personal preferences (switch up the fixings, use a different chip), but proper assembly is nonnegotiable…You can’t just dump chips and cheese together and expect crunchy-melty-salty-spicy excellence. After years of experimenting for my annual nacho party (held during one very big football game), I’ve landed on a few rules for each component.

There’s a strategy, argues Knowlton, for prepping and assembling each component: the chip, the cheese, the meat, and the fixings. Munch on over to Bon Appetit to learn the The Five Keys To Reaching Nacho Nirvana