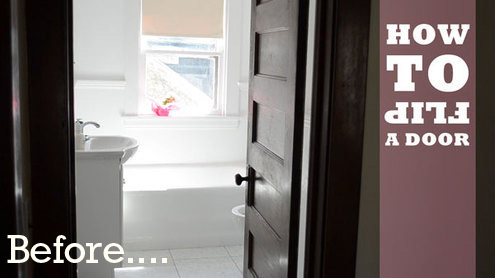 As part of our ongoing house remodel (read more at our sister site, Curbly.com), we ended up with a bathroom door that swung in the wrong direction (well, not ‘wrong’ precisely, but just not the way we wanted it to). It opened into the bathroom, which was fine, but it swung from left to right, and we wanted it to swing the opposite way. So, with a few trusty hand tools I picked up at the local hardware store, I managed to get it flipped around. Read on to see how I did it.

First, I headed to my local True Value hardware store and picked up some tools I was lacking. I got a set of sharp chisels (for mortising the hinges and strike plate), as well a nail gun. I also got a length of 1/4″ wood dowel (more on that later), and a hand planer (since old doors are never quite square, and I figured I’d probably have to shave it down somewhere). 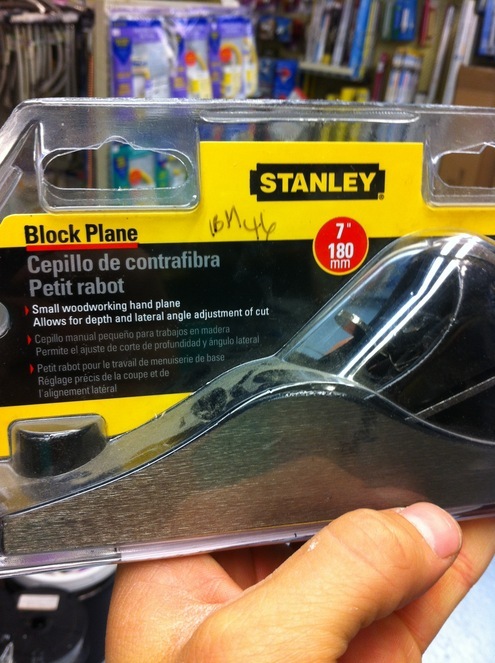 The nail gun is optional for this task, but because of the bathroom remodel I needed to fix up some of the door trim, so I took this opportunity to pick one up.

I started by carefully removing the existing door trim on the bathroom side. Any time you’re removing old trim, use a glazer’s bar instead of a hammer or a crow bar (a trim puller also works well, depending on the trim’s profile).

Once all the trim was off, I pulled the door off the hinges. Use a hammer to tap out the pins out. It helps to put a thin piece of wood (or a shim) down under the door first. 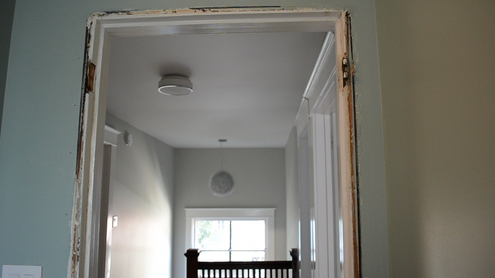 Next it was time to move the hinge plates. This is tricky business, since the tolerances are pretty low. The placement of the plates has to be just right (like, within an 1/8 of an inch), or the door won’t mount. And the hinge height needs to be right too, because if it’s off, the door won’t close properly. On new houses, this isn’t that hard, since the door frame tends to be pretty square, but on a 100-year-old house like ours, it’s kind of craziness-inducing.

I started out by measuring the positions of the existing hinge plates, and then transferring those measurements to the opposite jamb. You could also use a story pole to do this. Then, I took off the hinge plates and placed them in their new positions, marking their outlines with a pencil.

Then, just to make sure things would like up, I shimmed the door into the opening at the right height. Trust me, this step is worth the extra effort. You just get a bag of shims, place the door in its closed position, and then use the shims to hold it in place. This will let you check the the new hinge plates will be in just the right spot.

Now, it was time to mortise out the hinges. You can use a router with a template to do this, but I think a hammer and sharp chisel works fine (especially if you’re only doing one). I started by scoring the outline of the hinge, using a utility knife when going across the wood grain, and an awl on the long back section of the hinge that goes with the grain (the awl won’t follow the grain and get off track like the knife will). Then I used the awl to mark the mortise depth as well. 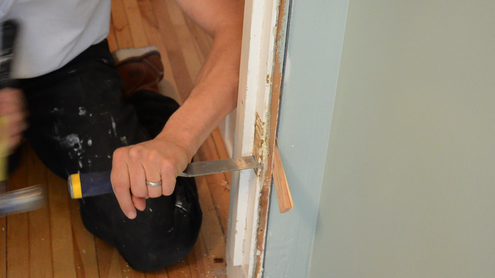 To cut out the mortise, I used a chisel at least as wide as the hinge, and made a series of cuts across the grain, spaced evenly and to the depth I marked with the awl. That leaves a series of little rectanges that you can chisel out by laying the chisel flat along the depth score and driving it toward the back of the door. (For a great description of this process, with pictures, go to http://www.finehomebuilding.com/how-to/articles/mortising-hinge-chisel.aspx)

If you think this sounds a little tedious, well, it is. And then I had to repeat the process to move the hinges to the other side of the door itself! No getting around it: this took a long time.

Once the hinges were all in their new positions, it was time to try putting the door back on! Everything looked amazing! Until I tried to close it. As I had suspected, the complete un-square-ness of our house meant the door wouldn’t close in reverse (probably because the door frame, or the wall itself, is out of square). 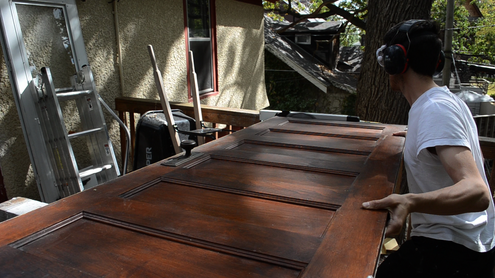 Fortunately, it was pretty close, and just require a close shave of the door with my table saw. After that, the door closed like a champ! Following a little more chiseling and drilling to get the new strike plate in, we once again had a properly-closing bathroom door.

Finally, I used my awesome new nail gun to put to old trim back up. Now it’s just time to give everything a final coat of white paint! 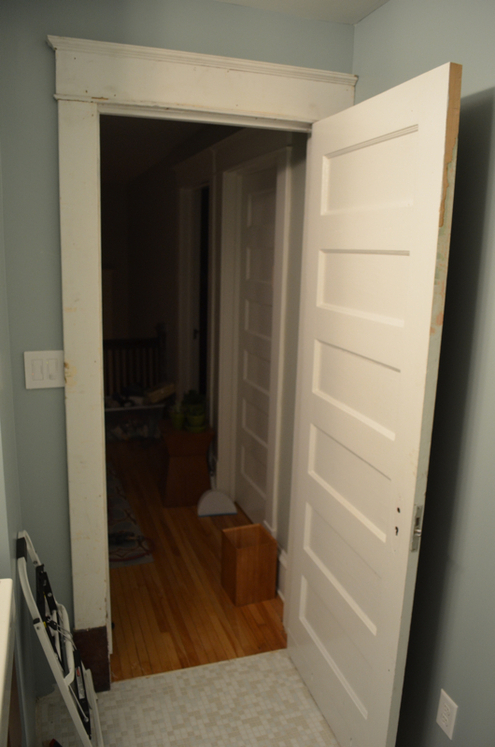 Thanks to True Value for sponsoring this post! All opinions are ours alone. 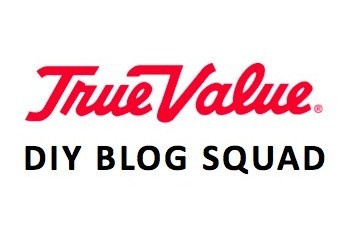