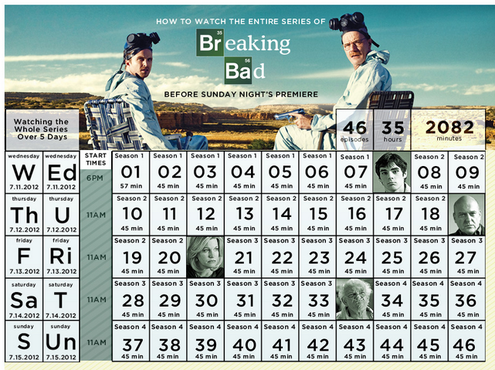 This Sunday, season five of Breaking Bad, easily one of television’s top five dramas ever, begins, and those in the know are understandably excited.

Unfortunately, like most of television’s top shows, it’s kinda tough to jump in with four seasons behind you, even if you do know the basic premise of the show (which you do, because you know how to use the internet.)So, John Gara has created this plan for getting caught up. If you’re reading this on Thursday (which you are, cause I just posted it), you’re already a day behind, but John offers the more intense, P90x-style two-day version, which you don’t need to begin until Saturday morning.

So, hop to it. Seasons 1-2 are streaming on Netflix Instant, and the DVDs are worth every penny. Go in with some friends, and have a marathon.