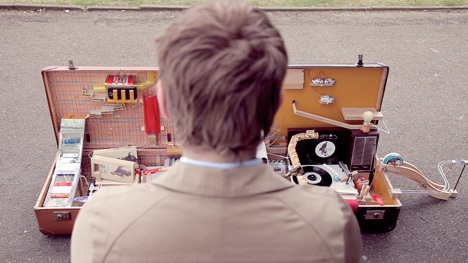 “Melvin the Mini Machine” is a suitcase- (well, two suitcase-) sized Rube Goldberg machine that, when executed, creates a postcard, sending well wishes from Melvin himself.

It is, like all kinetic art, better viewed in motion, so take a look at the video to see it in all it’s adorable action.

Melvin was created by Dutch design firm HeyHeyHey, who first big a much larger Melvin two years ago.

When we built our first Melvin late 2010, we built it BIG because it needed to entertain loads of people all at once. After its initial (online) success, a lot of people, companies and festivals inquired about its availability to do a show. After some phone calls and e-mails back and forth the conclusion was always the same: Melvin was simply too big and expensive to rebuild.

Early 2012, we had some time to spare and we felt the need to challenge ourselves once again, so we set out to build a new Melvin. This time around we could determine our own boundaries and that’s why we decided to build a travel version that ‘sends’ its own postcards and interacts (in some way) with the people around it.

In short, this new Melvin is a Rube Goldberg machine specifically built to travel the world, and let’s be honest, we like the idea of going with him whenever and wherever we can. 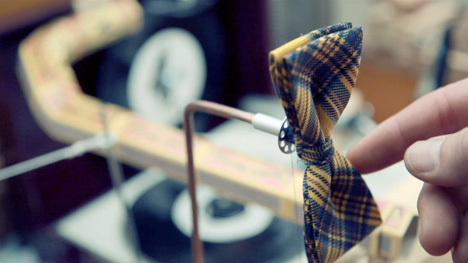 While it’s functionality is impressive, it’s vintage masculine design details are what turn it into a piece of art: the worn, leather suitcases, a tartan bowtie, a wooden pipe, an old turntable.

Get more details, photos, and see all thirty-eight steps on Core77