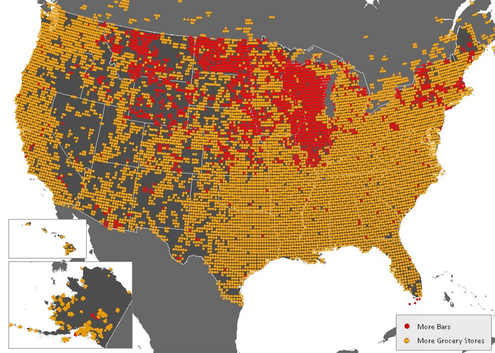 Armed with Google maps and the finely tuned research skills of a team of geography professors and graduate students, the curious minds at FloatingSheep set out to answer the simple question, “where can I get a drink.”      The resulting inquiries began to surprise them. “We were quite surprised, however, when we did a simple comparison between grocery stores and bars to discover a remarkable geographically phenomenon. We had expected that grocery stores would outnumber bars and for most parts of North America that is the case. But we could also clearly see the ‘beer belly of America’ peeking out through the ‘t-shirt of data.’ ” 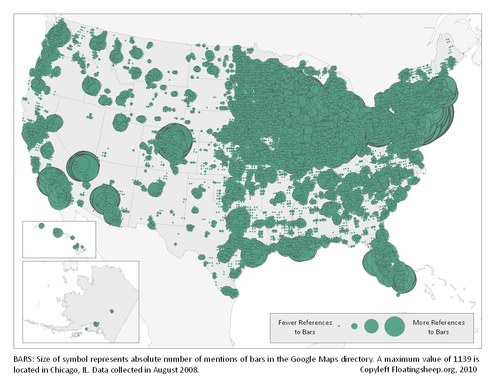 “Starting in Illinois, the beer belly expands up into Wisconsin and first spreads westward through Iowa/Minnesota and then engulfs Nebraska, and the Dakotas before petering out (like a pair of love handles) in Wyoming and Montana.”

Furthermore, they team also compared the populations of these communities to the national average of bars v. humans. “On average there are 1.52 bars for every 10,000 people in the U.S. but the states that make up the beer belly of America are highly skewed from this average.”

Fas-cin-ating. Check out more of their findings at FloatingSheep: The Beer Belly of America