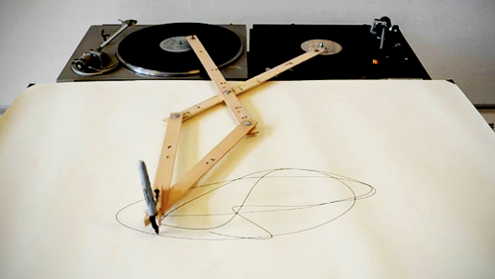 Robert Howsare, an MFA student in printmaking at Ohio University, built his latest work “Drawing Apparatus” out of two garage sale turntables and an various bits of wood and hardware. The results look like the old Spirograph toys we played with as kids: mathematical, yet still touched by physical forces and materials. Wired reports,

A turntable that has a variable pitch control is useful for controlling the size and shape of the drawings. In the video above, the turntable on the left moves at 33 rpm, while the turntable on the right moves at close to 45 rpm. As for the other components? A few slats of wood, binding screws, machine screws, old records, and a Sharpie mounted on a clothespin. Howsare, a former DJ, uses the vinyl records to adjust the height of the wooden arms as they move. “I really like the sound of the movement of the pen…there’s something kind of hypnotic and sensual about it, just going back and forth,” Howsare said.

Click play on the video below to watch this thing in action: 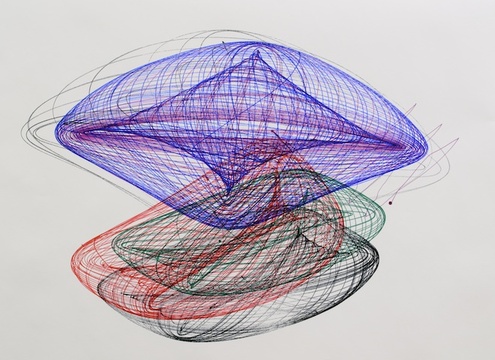 Read more about the turntable drawing bot at Wired