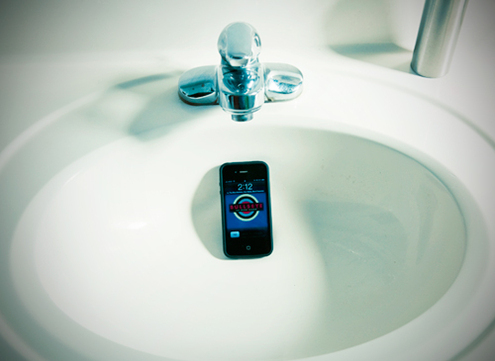 I have all kinds of audio equipment: stereos, recievers, speakers, iPod docks, headphones, car inputs. All of it. I love music. But at least 50% I’m listening to the news or podcasts on my phone, I’m using the built-in speakers. Those tiny 1/8″ drivers that aren’t much bigger than those found in earbuds with none of the being-in-your-skull benefits.

And the number one place it happens? In the bathroom, while getting clean, shaving, etc.   I’ve often considered getting a little speaker dock for the bathroom but I 1) don’t have anywhere to put it that’s safe from water and 2) don’t want a bunch of power cables snaking around that small space, and 3) Would rather spend $100 on many, many other things.

So, the other day, I spied this free amplifying idea on Reddit, whereby you use the bowl shape of the sink to amplify the tiny speakers. Similar to the way ancient theatres work – the natural shape encourages cross reflections, making the signal louder.

So this morning I tried it, and it totally worked. Before, I could hear only the high frequencies, which makes music barely distinguishable and human voices inaudible. But placed in the sink, I can listen to the morning news or a podcast with ease.

Yes, you wanna be careful about water. Be smart about steam and condensation, and definitely make sure the sink is dry and there’s no threat of faucet drips. Mine’s always in a case, so there’s no danger of scratching. You don’t wanna do it everyday, I’m sure, and should probably leave the door open. But, my phone’s usually in there anyway, so it’s not that different if you keep it dry. It makes the audio significantly louder, for free, and that’s useful, indeed. 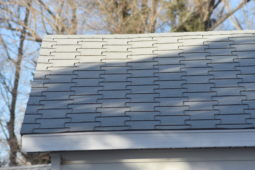