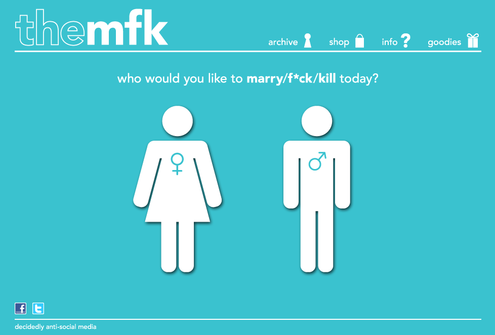 I was first introduced to the MFK game by a friend at a summer job in college, at one of those we-just-got-off-at-2:00-am-and-we’re-all-totally-alert-and-can’t-fall-asleep-until-the-sun-comes-up sorta hang outs. We were sitting outside on the roof his six-story building, and he submitted, “Chris, MFK game. Veronica from the Archie comics, Josie, of and the Pussycats, or Velma from Scooby Doo.”

I had to admit, I didn’t quite understand what was being suggested at first, but I learned quickly, and got to know my co-workers pretty well by the end of the night.

The game works like this. “Every quiz features three people united by a common theme. You have to choose who you would marry (remember, it’s forever), who you would f*ck (just the one time), and who you would kill (don’t get squeamish on us).” 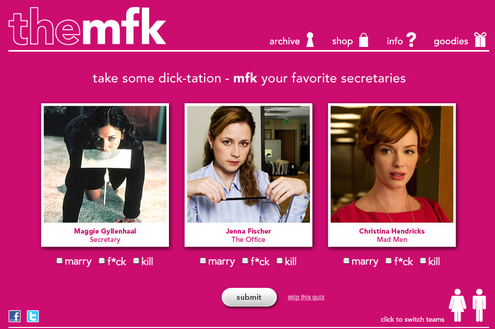 Some enterprising designers have built an online version, complete with a whole series of triumverates, and accompanying statistics to see how others voted, which is always the most interesting. Though you can’t hear the reasoning behind others choices, so I say using the site for its combos, but talk it out amoungst a group of friends.

Your get-together shant be boring. Promise. Available in both male and females triptychs. 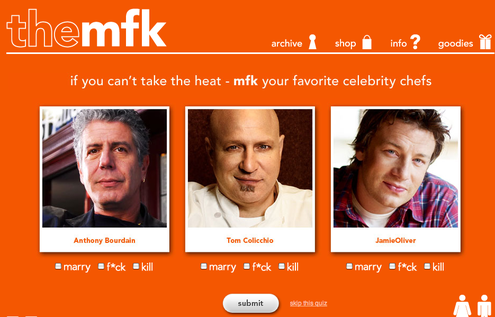