I know, I know. Your $20 Ikea coffee table is fine. But, the thing is, I’m old now. I just turned 32, and 32-year olds have beautifully crafted, handmade, coffee tables. I think it’s something we’re legally compelled to do. Look it up on Wikipedia. 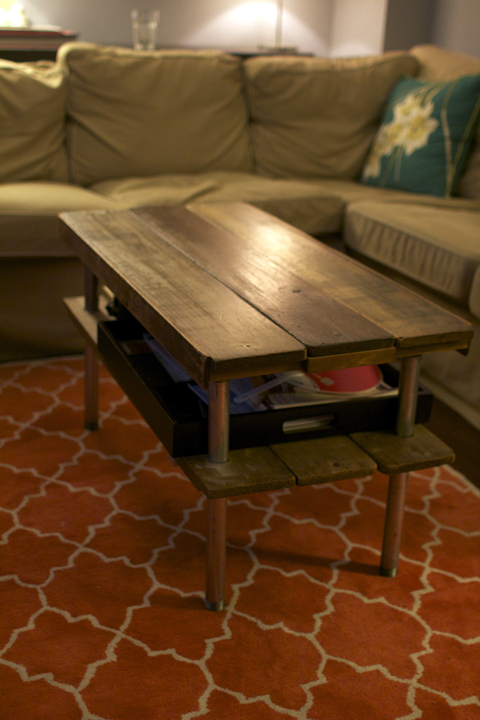 To start out our project, we needed some pretty wood to form the top and second shelf of the table. While at an antiques fair in Massachusetts, my lovely wife found three sets of wooden cigar rollers. Since they came in sets of two, we’d have three for the two levels of coffee table goodness. 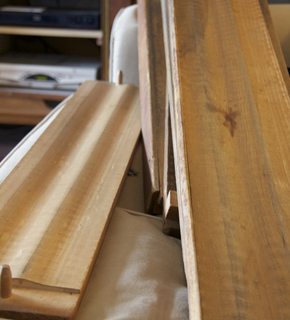 Next, we needed the rest of the crap to put it all together. It’s best, when doing a build from scratch project, to not plan anything beyond writing down the dimensions of the items you already have*.

We went to Lowes. Having grown up in St. Paul, MN, nothing prepares you for how disinterested and rude employees at stores like this can be. We literally had to chase an employee in the wood section down, because he saw us coming and started walking very fast away from us. 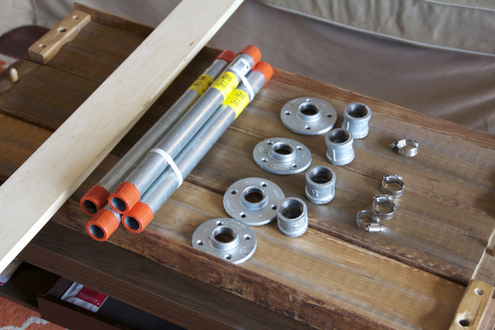 So, the first thing we did was pick which three boards were the top (The pretty ones) and which were the second shelf. Then I sawed the pine into two pieces to mount both the boards, and the flanges. 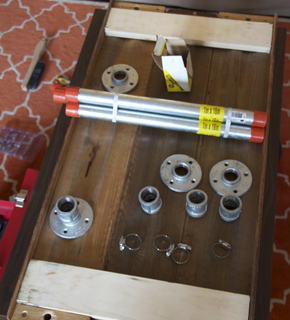 Once the boards were nailed in, I drilled out holes and mounted the flanges. I don’t know what these are actually made for, but the pipes don’t screw in all the way. 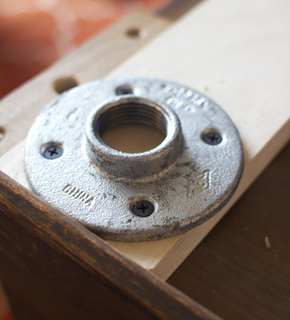 Next I took two tiny strips of wood from an old Ikea butcher block/cart and used those to mount the second shelf. Once that was put together snugly, I set the table top with legs on top of the second shelf so I could see where the holes needed to be drilled.

I was about to use the 1″ drill bit, when I realized that it wasn’t wide enough. Note to the inexperienced such as myself, the 1″ measurement refers to the threads only, not the actual diameter of the pipe.

I drilled the holes, pulled the second shelf up to the desired height, and then fixed them in place using the hose clamps. The carbon screw part sticks out far enough that the shelf can sit on them. I don’t know how much weight this shelf could support, but it’s got a bunch of DVDs in two cases, a serving tray filled with magazines and all our remotes and it hasn’t fallen… YET. 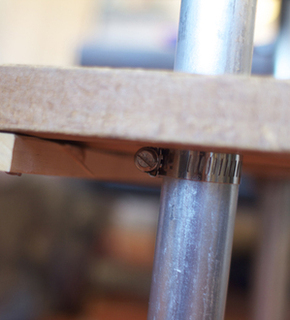 Lastly we finished the table top. You lightly sand the wood, very gently, and then clean it with a damp paper towel. Then you apply a clear coat and wait two hours. Do this process two more times. 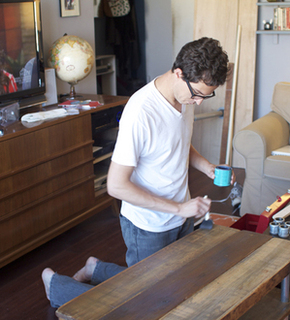 I’m still trying to figure out what to put on the bottoms of the pipes, though, I’m afraid they’re going to leave crazy marks in the carpet. Any suggestions would be greatly appreciated in the comments section.

*that is, of course if you don’t mind multiple trips to the hardware store and an unstoppable amount of DIY rage.