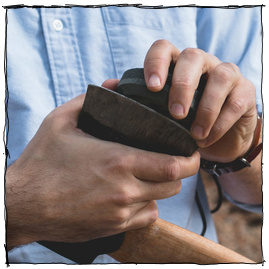 How to Sharpen Your Axe

Whether on your workbench or out in the forest, here's how to get the edge you need.

More Featured Posts: How to Drill, Saw, or Do Anything Straighter How to Take Care of Your Sweaters The Best Way to Maintain Your Cast Iron Cookware How to Improve Your Charcoal Grill To answer these, you can do a four-year degree in graphic design. You could purchase a copy of the excellent "Font. The Sourcebook." or "Designing with Type." Or you could head to Just Creative Design, and download their free 27-page eBook, "The Type Classification Handbook."

Who Needs a Space Shuttle? Amazing Pictures of Earth Captured by One Man, a Balloon, and His Compact Camera Well folks, this is the last day of my visit to ManMade, and I thought we should end it the way we began it--with Star Wars. Seriously, how is it possible for someone not to have seen at least ONE of these movies? At least one of the first three, or last three...whatever....you know what I mean. 2x4, the flickr member who made this Lego Star Wars Foosball table would be equally flummoxed, to be sure. The players, made out of Legos, are mini-figures from Star Wars, and the table itself is play-able. The only thing that would make it cooler is if, when the Empire side scored it played The Imperial March (Vader's Theme). And when the Rebel

How to: Crochet an RSS Feed X-Stitch Pillow

Whip up an RSS Feed Pillow to show your love of technology and pillows! The colorful and cheeky design is my own, and I'm happy to share it with ManMade-ians everywhere. 'But, Maven', you might be saying, 'I don't know how to crochet!' Oh....poo. Crocheting is easy to learn. (My grandma taught me when I was 8!) Of course, if you don't have a crocheting granny, not to worry. Crafty Daisies has superior FREE crochet tutorials on their website. As for x-stitching, that's even easier. (Here's a quick illustration.) Other than that, all the information you need to make the pillow can be found at this post on my website, diymaven.com.

StarTrek fan Tony Alleyne used his love of arts & crafts and science fiction to turn his 500 square foot apartment into a replica of the Enterprise's transporter room. Two years after he completed his StarTrek makeover, Tony started his own design company, 24th Century Design, hoping to help others bring their sci-fi fantasies to life. Reports suggest that Tony paid about 100K British pounds outfitting his pad with such things as voice-activated lighting. (I hope you have to say 'computer' first.) To see more images, follow this link. And to take a virtual of Tony's TNG creation, click here.

A while back Chris hooked you up with Five Very Manly, DIY After Shave Recipes. Now we take a step back in the process to help you make your shaving experience even more soothing.

For those of you not

Hello ManMade-ians! I am honored to mind the store as my buddy Chris is off galavanting the world doing good deeds. But now that he's gone, let's talk about him behind his back, shall we? Chris has never seen Star Wars. As a matter of fact, he's never seen any of the Star Wars films. How does that happen?? A man of his age, in this day and age? I don't get it. (Shakes head.) So, just to bust his chops a bit--and to goad him into finally seeing the films--I thought I start my stint on ManMade with something those of us who have seen the films would appreciate: A Death Star Watermelon. It was lovingly made, I'm sure, by flickr user

By the time you read this, I'll be off to the U.S./Mexico border to get my hands dirty, flex my service learning muscles, and get crazy constructive with an excellent group of college students. While I'm gone, my friend JoAnn Moser will be keeping her eye on ManMade, and providing some excellent guest blogging posts!

JoAnn is super maker, DIYer, and a master of all things crafty. She inherited the DIY gene from her parents, and was a total tomboy growing up, and still has some latent tomboy tendencies - she'll take tools or photography or electronic equipment over jewelry any day, so she surely gets the spirit of ManMade.

How To: Embroider a Necktie

It's my hope that, one day, I'll be able to make every necktie I own, from scratch. Until then, I'm digging on this idea I tripped over at the always awesome Doe-C-Doe: adding a little custom embroidery to a store-bought tie, creating lots of handmade flair and plenty of personality.