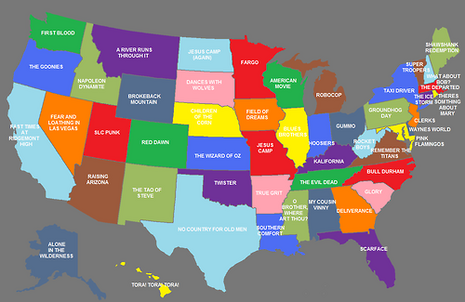 Redditor subtonix made a map of the United States, describing each state by a film he thought best fit.

Fantastic idea, but some of the choices are likely to offend film fans and citizens alike. It seems the creator made some pretty intentional choices to poke fun at some states. Wayne’s World for Delaware? The use of Jesus Camp, twice?! And for my own home state of Ohio…I’ve seen Gummo, and have been to Xenia. Not even close.

See the full-sized version here, and then check the comments to see all the feedback.